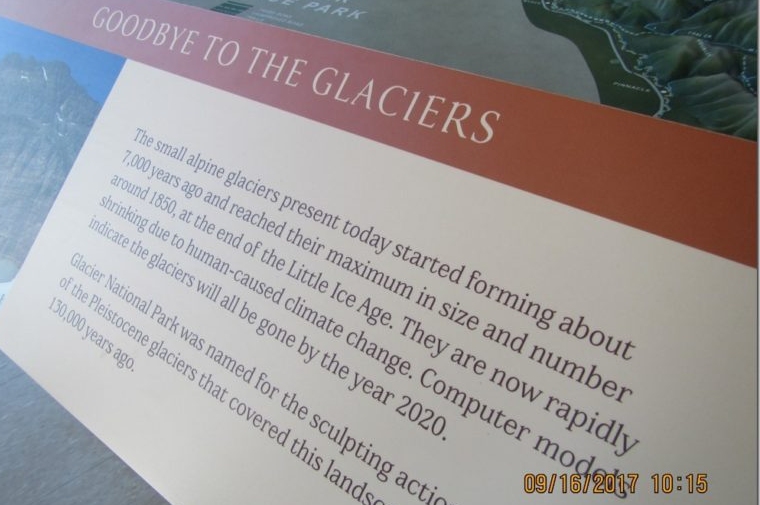 A display at the St. Mary Valley Visitor’s Center at Glacier National Park (click for source)

My wife and I go to Montana almost every year to visit family, and we always make at least one trip into Glacier National Park. It is truly magnificent, and if you are in the area, I highly recommend that you visit it. However, be aware that global warming hysteria is presented nearly everywhere in the park. You can’t go into a visitor’s center (or even look at some of the trash cans) without being told that global warming is destroying the glaciers.

While I never noticed the silly sign pictured above, it was apparently in the visitor’s center at St. Mary Valley for several years, but this winter, it was quietly removed. It should be obvious why. The sign says that computer models indicate the glaciers will be gone by next year. However, it’s clear that isn’t going to happen, so they had to do something. Rather than owning up to their mistake and discussing the uncertainties related to global warming, they simply changed the sign. Apparently, it now says that the glaciers will be gone at some unknown time in the future, unless we act quickly to stop global warming.

Now, of course, you might wonder if this was just a mistake. Perhaps a couple of signs got made incorrectly. After all, some signs in Glacier National Park say the glaciers will be gone in 2030. I haven’t heard whether or not those signs have been changed as well. However, we know that it was more than just a couple of signs. It was a sermon preached by at least one of the rangers. Ginna Kelly writes:

During my stay, I talked with Park Ranger Jim Muhlhausen about why the glaciers are disappearing. The reason is climate change. Jim talked about what he sees on a daily basis. “It’s disturbing. You can directly see the effects. The change in vegetation, the reduction in habitat, and the melting of the glaciers.”

The evidence that the glaciers are melting speaks for itself. When the park was founded in 1910, there were 150 glaciers. Today, 25 exist. By 2020, none will exist.

The same nonsense has been reported by other news outlets, such as USA Today.

Of course, the glaciers in Glacier National Park are melting. They have been melting since the end of the Little Ice Age, which was around 1850. Whether or not this is because of natural cycles that have occurred throughout earth’s history, current human activity, or some combination of the two, nobody knows for sure. Thus, it is impossible to give dates for when they will disappear. In fact, it is impossible to know whether or not they will ever disappear. Indeed, my own observations of the glaciers in Glacier National Park (I see it roughly the same time every year) indicate that they have been growing over the past five years, but I am certainly no glaciologist.

What I can say for sure is this: As more nonsensical predictions like this one are made, the less people will actually believe that human-induced global warming is happening. Indeed, past nonsensical predictions could be part of the reason that only a few people rank a candidate’s position on global warming as a major issue when deciding how to vote.

Not long ago, I wrote a post about ignorant people claiming that others are rejecting science. Well, if this is what passes for science these days, I can understand why some reject it!