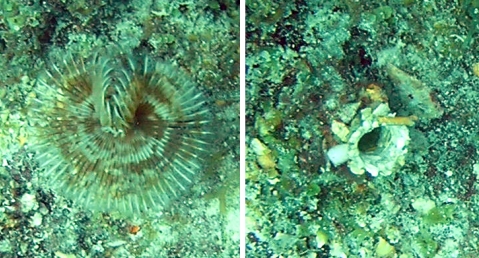 On the left, you see a tubeworm with its feathery feeding appendages extended. On the right, the tubeworm has retracted those appendages, and you see only the opening of its tube.

When I scuba dive, I love finding tubeworms like the one pictured above. As adults, these worms build tubes made out of calcium carbonate to house their delicate bodies. They feed by extending feathery appendages called radioles, which catch nutrients that are floating in the water. On the left side of the picture above, you see a tubeworm with its radioles extended. However, if you scare a tubeworm (I do so by flicking my fingers at it), the worm will pull its radioles back into its tube for protection. At that point, you see only the opening of the tube, which is shown on the right side of the picture above.

An adult tubeworm spends its life attached to a hard surface, such as a piece of coral, a rock, or even the hull of a ship. However, when a tubeworm egg hatches, the larva that emerges is free-swiming and looks nothing like the adult. In order to mature, it must find a surface to which it can attach itself. It has long been known that tubeworm larvae tend to attach themselves to surfaces that contain specific bacteria, but no one understood how the larvae know where the bacteria are.

Nicholas J. Shikuma and his colleagues have done a study that helps us understand this amazing process. They concentrated on a specific species of tubeworm, Hydroides elegans, which is a common nuisance because it tends to stick to the hulls of ships (that’s not the species pictured above). They already knew that these tubeworms tend to settle where a specific bacterium, Pseudoalteromonas luteoviolacea, is found. As a result, they studied the bacterium in detail, and they found something rather incredible.

They found that the bacterium has genes which produce structures that look a bit like the viruses that attack bacteria. This was not new information. Microbiologists had seen these genes before, and it has been shown that bacteria can use them to make structures that kill other bacteria.1 However, they found that if they knocked those genes out of the bacteria, the tubeworms would no longer settle on the surfaces occupied by the bacteria. As a result, they concluded that the products of those genes must be a crucial part of what causes the tubeworm larvae to attach to a surface.2

Upon further investigation, they found that about 2% of the individuals in a bacterial colony produce these structures. The individuals will fill themselves with the structures and then break open, releasing hundreds of them. Those structures then form a net, and when the larva of a tubeworm hits the net, it chooses to settle down there. The researchers don’t know why the bacteria do this, and they don’t know of any benefit that the tubeworms give to the bacteria. Nevertheless, it does seem clear that the bacteria purposefully lay down these tubeworm-catching nets. Indeed, 2% of the population dies in order to make them!

I find these results fascinating because prior to this study, it was thought that the structures which make these nets were produced by bacteria only to harm others. However, we now know that they are also used to help a completely different species. It makes me wonder if this is one example of how the Fall affected nature. Could it be that these structures were initially designed to help out tubeworms so their larvae would know where to land? Could it be that after the Fall, those same structures were adapted to also cause harm?

I hope these results encourage more research into the complex relationship between bacteria and tubeworms. I suspect that the reason the bacteria lay out “welcome mats” for tubeworms is because they live in a mutually-beneficial relationship with one another. I have written several articles about how organisms of different species work together in order to survive (see here, here, here, here, here, and here for example), and I think it is one of the most interesting aspects of nature.