On May 20th, Oklahoma City and its suburbs were hit by a devastating tornado. According to the latest news reports, the mega-tornado killed at least 24 people, nine of them children. My prayers go out to those whose lives have been affected by this terrible tragedy. While the situation is clearly an emotional one, we can’t let our emotions get away with us when it comes to understanding the science behind this tragedy.

What do I mean by that? Well, consider what Senator Barbara Boxer said on the floor of the Senate regarding the tornado:

This is climate change. We were warned about extreme weather. Not just hot weather. But extreme weather. When I had my hearings, when I had the gavel years ago. It’s been a while. The scientists all agreed that what we’d start to see was extreme weather. And people looked at one another and said “what do you mean? It’s gonna get hot?” Yeah, it’s gonna get hot. But you’re also going to see snow in the summer in some places. You’re gonna have terrible storms. You’re going to have tornadoes and all the rest. We need to protect our people. That’s our number one obligation and we have to deal with this threat that is upon us and that is gonna get worse and worse though the years.

She then went on to talk about a bill she has sponsored. It would put a tax on carbon in hopes of moving people to alternative sources of energy so as to reduce the effects of “climate change.” While Senator Boxer’s words are an emotional call-to-arms, they fly in the face of the scientific evidence.

First, let’s just look at the total number of tornadoes that have happened in the U.S. over the past 60 years. Tornadoes are currently rated on the Enhanced Fujita (EF) Scale. The scale runs from 0-5, but an EF0 tornado is better classified as a gale. As a result, to track actual tornadoes, the National Oceanic and Atmospheric Administration (NOAA) looks at EF1-strength tornadoes and higher. Here is what they say has happened in the U.S. since 1954: 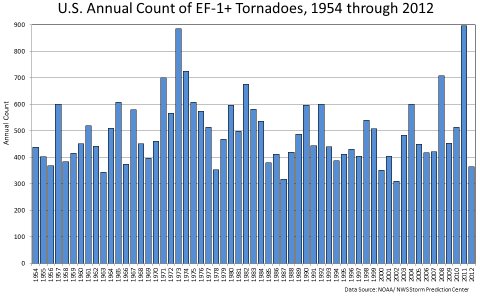 Do you see a trend there? I most certainly do not. Since 1954, the concentration of carbon dioxide in the atmosphere has increased dramatically. If tornadoes can be linked to carbon-dioxide-induced climate change, why hasn’t the number of tornadoes increased during that same time period?

Well…maybe it’s just the violent tornadoes that have increased. After all, Senator Boxer says it’s all about “extreme weather.” Well, the NOAA data on violent tornadoes (EF3 or higher) do show a bit of a trend, but the trend is opposite of what would be observed if “climate change” causes violent tornadoes: 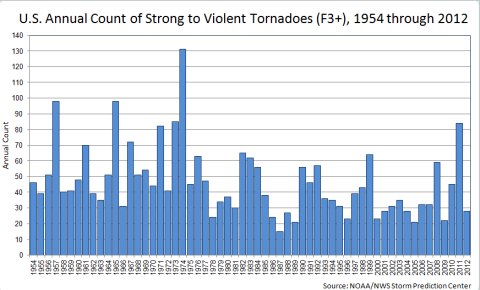 If anything, then, the data indicate that the supposed “climate change” that is going on is decreasing the number of violent tornadoes in the U.S.! Now, of course, I don’t think there is any connection between the two. My point is that if anything, the data say precisely the opposite of what Senator Boxer claims.

Now, of course, the fact that a politician doesn’t bother to investigate the scientific data regarding tornadoes doesn’t surprise me. In fact, it is simply part of a pattern: When something bad happens, blame it on the currently-fashionable scientific crisis, no matter what that crisis is.

For example, on April 28th, 1975, Newsweek published an article entitled “The Cooling World.” The article claimed that the word was cooling and that the data supporting this “fact” were accumulating so massively that scientists were having a hard time keeping up with it. What would the results of this devastating “global cooling” be? The article says:

Last April, in the most devastating outbreak of tornadoes ever recorded, 148 twisters killed 300 people and caused half a billion dollars’ worth of damage in thirteen U.S. states.

Trend
To scientists, these seemingly disparate incidents represent the advance signs of fundamental changes in the world’s weather.

In other words, back in 1975, severe tornadoes were the result of “global cooling.” Now that we have switched to a new crisis, people have simply switched the blame for tornadoes from “global cooling” to “global warming” (AKA “climate change”).

If we ever want to have sane policies regarding the environment, we need to have politicians that actually investigate the scientific evidence rather than just blaming every bad thing that happens on the currently-fashionable scientific crisis.

Unfortunately, I seriously doubt that will ever happen.