Beavers are amazing animals. They can actually alter their surroundings in a purposeful way in order to make them more suitable. They do this by building dams so that water collects to form an amazing wetland environment. Here is an example: 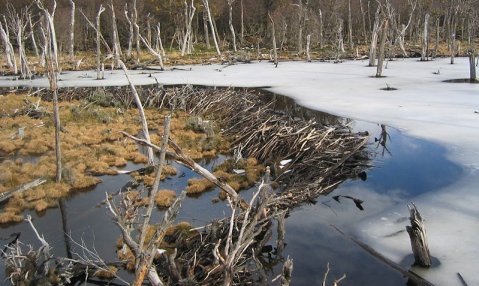 A Beaver Dam
Image from http://en.wikipedia.org/wiki/File:Beaver_dam_in_Tierra_del_Fuego.jpg

If beavers don’t live in their dams, where do they live? They build separate lodges in the wetland area. Here is an example: 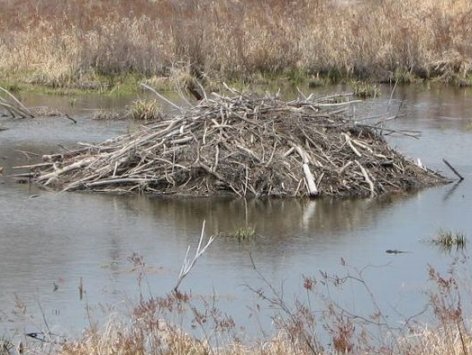 A Beaver Lodge
Image from http://en.wikipedia.org/wiki/File:Beaverlodge.JPG

As you can see, the lodge rises above the water. The inside of the lodge is dry, but notice there are no visible entrances. That’s because the entrances are on the underside of the lodge. The beavers must swim underwater to enter the lodge. This is great for them, because they are perfectly designed for swimming underwater. They are equipped with valves that close their ears and noses when they are underwater. They even have clear membranes that cover their eyes when they are underwater. In other words, they have built-in swimming goggles! They also have webbed hind feet, which makes them great swimmers. At the same time, most of their predators won’t follow them underwater, so their lodge is a safe place to hide and raise their young.

Why am I writing about beavers? Because I just stumbled across a story about Ecologist Jean Thie using Google Earth to find the largest beaver dam in the world. This beaver dam is in Alberta, Canada, and it is estimated to be 850 meters (about 2,800 feet) long. That’s more than half a mile long, and it is more than twice the length of the Hoover Dam! Here’s an image from Google Earth that shows the entire dam: 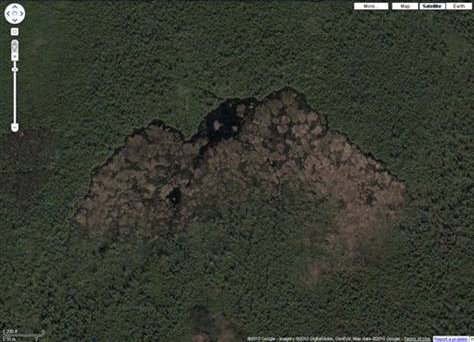 The Dam as Seen by Google Earth

The black is water, which tells you where the dam is. The brown area south of the dam is the wetland formed by the collection of water and the deforestation that the beavers cause to build and maintain the dam. According to the ecologist, there are at least two beaver lodges in the wetland, indicating that at least two families collaborated on the construction of the dam.

There are some awesome pictures of this structure taken during a flyover here. It turns out that the area in which this dam is constructed is so remote that the only way to visit it is to take a helicopter to the general area and then hike for two days to reach the dam itself. Boston University natural science professor Dr. Peter Busher has studied beavers for 35 years and says the size of the dam is “unbelievable.” He also says:

We don’t know if they are thinking: ‘I’m going to stick this branch in this position’…When we look at it, it does look very sophisticated, they’ll have branches intertwined and so on.

Now this is truly a remarkable thing. Why, then, does the ecologist feel the need to overhype the story? Consider, for example, how the story was reported on Foxnews.com:

Now that’s just plain silly. The beaver dam is big, but it’s not visible from space. The Great Wall of China is, but the beaver dam is not. It turns out that Fox News got that phrase from the ecologist who discovered the dam. He says that he is justified in saying this, because he used satellites in space to find the dam. Of course, using that criterion, my house is visible from outer space as well: 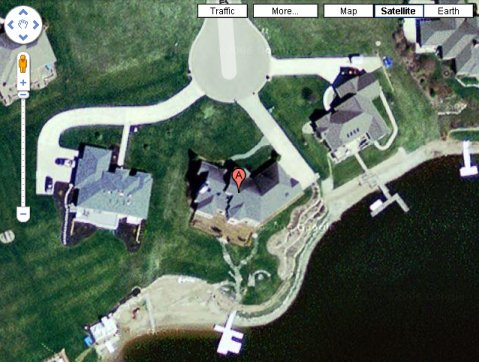 All hype aside, this dam is truly amazing. As a scientist, it fills me with all sorts of questions regarding how long it took for this dam to be constructed, how the beaver families “collaborated” to produce it, etc., etc. As a Christian, it fills me with wonder regarding the amazing Creation that God has given us to enjoy and explore.

Like Loading...
This entry was posted in Creationism, Modern Science, The Wonders of Creation. Bookmark the permalink.