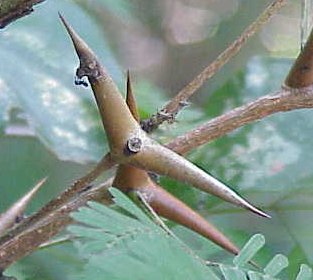 Proverbs 6:6 tells us, “Go to the ant, O sluggard, Observe her ways and be wise.” As this verse suggests, scientists who have studied the ant have learned all sorts of wonderful things. I mentioned previously the remarkable mutualistic relationship between Crematogaster (also called Cregaster) ants and certain Acacia trees. The trees provide food and housing for the ants, and the ants fiercely attack anything that tries to eat their tree. As I discussed in a follow-up post, scientists who thought they would “help” Acacia trees by fencing them in to protect them from large herbivores like elephants actually ended up hurting the trees. In the end, the scientists could not improve on the protection that the ants provide the tree naturally.

This intrigued the scientists who were bested by the ants, so they wanted to find out whether or not it is really possible for the tiny Crematogaster ants to actually defend the tree from the world’s largest land animal. Thus, they conducted a follow-up study, and the results were incredible!

According to Science Now, ecologists Todd Palmer and Jacob Goheen studied six orphaned elephants that lived in a Kenyan rehabilitation center that had a reasonably natural setting. They took branches off two species of Acacia tree – one that hosts the ants and one that does not. They then removed the ants from the branches that had ants on them. At this point, then, they had branches from two different species of Acacia tree, and all the branches were ant-free.

To further test whether or not it was really the ants that were protecting the trees, they went into the wild and used smoke to chase ants off several Acacia trees. They then monitored the trees, allowing different numbers of ants to inhabit different trees. After a full year, the trees that housed the highest number of ants per square meter of tree were untouched by elephants, while those that housed a small number of ants per square meter had been eaten by elephants. In fact, the density of ants on the tree determined how much of the tree had been eaten.

So the ants really are protecting the trees from elephants! This has amazing consequences for the ecosystem as a whole. Think about it. Elephants can devastate forests by overgrazing, which can actually turn forests into prairies. These tiny ants are powerful enough, however, to keep that from happening. The largest land animals in the world are simply no match for them!

As ecologist Lee Dyer, who was not involved in the study, notes, the implications of this research could be worldwide. Who would have ever thought that tiny ants can prevent deforestation by large land animals? Now that we know this happens on the African savanna, it is reasonable to assume that it probably happens in other ecosystems as well.

The more we learn about God’s creation, the more I am stunned by how it is all so intricately designed. Even a mighty creature like the elephant must answer to the lowly ant so that the overall ecosystem can flourish. Such systems don’t develop because the elephants and ants are simply competing for survival. They develop because they have been designed for the good of the entire ecosystem.