If You Thought Some of My Other Posts Were Geeky… 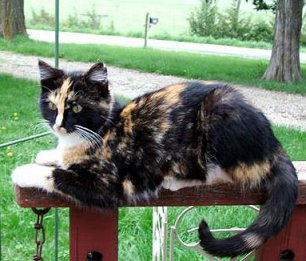 A few posts back, I commented on some experimental genetic results that throw a real monkey wrench into the generally-accepted view of the evolution of gender. Part of that post dealt with the concept of X-inactivation, the process by which one of a woman’s X chromosomes is inactivated so that she has no more functional X chromosomes than a man. A commenter known as jsilverheels then asked an excellent question, which I attempted to answer.

All of that discussion related to chromosomes, dominance, recessiveness, etc. got me thinking about sex-linked inheritance. It’s a common subject taught in high school biology, and it is something I discuss in my biology textbook. However, X-inactivation seemed (in my mind) to contradict something that is routinely taught in most high school biology courses. I searched the web for an answer to this apparent contradiction, but to no avail. No matter what kinds of keywords I used, I couldn’t find an article that addressed this particular problem.

As a last resort, I ended up E-MAILing my sister-in-law. My wife is brilliant, and she comes from a family of brilliant people. Her oldest sister is not only an accomplished molecular biologist, she is also a dedicated college professor. I knew she would have the answer to this question, but I hate to bother people who are busy doing such productive things. Nevertheless, I really wanted an answer, so I broke down and sent her the question. Not surprisingly, she answered it straightaway. I thought I would blog about it, mostly so I would remember it later on.

WARNING: If you thought what I have posted before was geeky, you probably won’t like what appears below the fold!

To set up the question, remember that for autosomes (chromosomes that have nothing to do with gender), humans have two of each. Thus, there are two of each “gene” that you find on autosomes. Technically, each gene on an autosome is called an “allele,” and the proper technical phrase is that there are two alleles for each autosomal gene.

In standard Mendelian genetics (which doesn’t always apply but is a nice starting point), an allele can be dominant or recessive. If you have even one dominant allele, you will express the dominant trait. In order to express the recessive trait, you must have two recessive alleles. A common example is the height of a pea plant. Pea plants tend to be tall or short, but nothing in between. There is a single autosomal gene that governs this, and the allele that produces a tall plant is dominant. So every plant has two alleles for height. If even one allele is the dominant one, the plant will be tall. The only way the plant can be short is for it to have two shortness alleles.

Once again, there is a standard example for this. Hemophilia is a blood disorder in which the blood does not clot well. A person with hemophilia can lose a lot of blood and even die from a small cut, because his or her blood doesn’t clot well. It turns out that this disease is governed by a single gene, which is located on the X chromosome. The recessive allele leads to a gene that cannot produce an important protein in blood clotting. The dominant allele leads to a gene that does produce the protein.

That’s the setup. If a woman has one dominant X allele and one recessive X allele, she will always express the dominant trait.

My sister-in-law provided the missing piece of the puzzle that allows me to understand why X-inactivation does not contradict the story given in every biology textbook. The key questions are, “When does X-inactivation occur, and how does it occur?”

Those cells begin reproducing and spreading their specific active genome. So roughly speaking, from day 16 on, the daughter will be “half-n-half.” As a result, half her cells will be able to produce the protein needed for blood clotting. Since not much of that protein is needed for good blood clotting, the half that can make the protein will produce sufficient amounts.

She tells me that this is why tortoiseshell cats look the way they do. The fur color of orange or black is based on a gene that resides on the X chromosome. So male cats in many breeds are generally all shades of orange or all shades of black, because they can have only one of the alleles. However, a female can have both alleles, and since half of her cells have one turned off and the other half have the other turned off, she will usually have spots of orange fur and spots of black fur.

The more I learn about genetics, the more I stand in awe of its Designer!

Like Loading...
This entry was posted in Answered Questions, Modern Science, The Wonders of Creation. Bookmark the permalink.