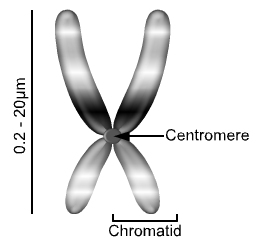 The centromere is the point at which a chromosome and its duplicate attach during cellular reproduction.
(click for credit)

One of the more stunning examples of a confirmed creationist prediction is given by the nature of DNA. Since the 1970s, evolutionists have taught (as an indisputable fact) that the majority of the human genome is made up of useless stretches of nonsensical sequences which have been collectively referred to as “junk DNA.” However, in a Herculean study of human DNA, the ENCODE team demonstrated that a minimum of 80% is used by the cell and therefore should not be referred to as “junk.” One of the scientists on the team (Dr. John A. Stamatoyannopolous) stated:

Actually, there were several scientists predicting this very result! Creationists have been doing so for years.*

Well, now that we know the vast majority of the human genome is functional, some scientists have removed the evolutionary blinders from their eyes (at least when it comes to the nature of DNA) and have begun to look at regions of the DNA that scientists have been assuring us could not possibly have any function whatsoever. When they study such regions, they (not surprisingly) find that those regions do have a function, and it is often a very important one.

The latest example of this kind of study has been published in the online journal Genome Research. The scientists involved in the study analyzed regions of the human genome that contain what is known as “repetitive DNA.” This kind of DNA is composed of a sequence that is repeated over and over again. Specifically, the researchers looked at repetitive DNA that can be found around the centromeres of chromosomes.

If you have taken a high school biology course, you have probably seen drawings of chromosomes, such as the one that appears at the top of this post. The “X” shape that is familiar to many biology students actually represents two chromosomes (an original and its duplicate) which are attached to one another. This shape only appears during a few stages of cellular reproduction, after the DNA has been duplicated but before the cell has divided into two distinct emtities. During this time, the chromosome and its duplicate are attached to one another at the centromere, forming the shape of an “X.”

There are two important things to pull from this research. First, it is clear that for this chromosome (and presumably others), there is a “backup site” for the centromere. When you see something with a backup built right into it, what does that tell you? It tells you that design is involved. The hallmark of any well-designed system is a series of backups that allow the system to continue to work even when its primary processes fail. The very fact that at least some chromosomes have backup sites for their centromeres should tell you that the architecture of the chromosome is the result of design.

Second (and more important), you can see that this is a stunning confirmation that the DNA evolutionists have dismissed as “junk” is actually of vital importance. Think about it. When it comes to DNA, what could be more “useless” than a sequence that simply repeats over and over again? The information stored in DNA is based on variations in its sequences. A repeating sequence clearly contains very little information, right? Obviously not. If a variation in that sequence results in the centromere being built somewhere else, the sequence is obviously of vital importance.

Unfortunately, because of the blinders installed by evolution, repetitive DNA sequences such as the ones analyzed by this research team have been ignored for far too long. As the lead scientist on the team said in a press release:

What we found in this study is probably the tip of the iceberg…There could be all sorts of functional consequences to having variation within the complex, repetitive portion of the genome that we don’t know about yet.

NOTE: Intelligent design advocates (who are usually quite different from creationists) have also been saying the same thing, so their view also gets credit for this confirmed prediction.
Return to Text