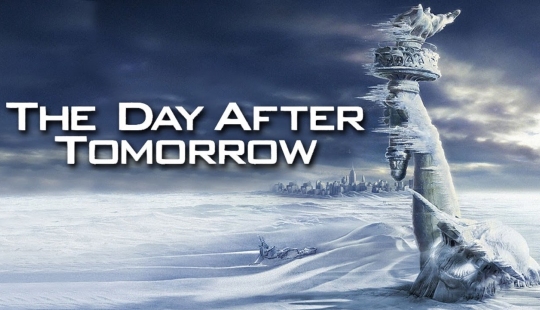 A promotional banner for the film “The Day After Tomorrow.” (click for credit)

The Day After Tomorrow was a 2004 film co-written, directed, and produced by Roland Emmerich. It depicted the destruction of a good fraction of the United States by a terrible weather calamity that had been brought about by global warming. While it was widely recognized as being scientifically inaccurate, it supposedly had a scientific premise. The idea was that global warming had caused so much polar ice to melt that it interrupted the North Atlantic current that transports heat around the world. As a result, outbreaks of violent weather occurred, causing terrible destruction. The media discussed the film a lot back then, and even Al Gore said that while it was fiction, it was a good starting point for a debate about climate change.

While no scientist would ever suggest that such a thing could happen as depicted in the movie (the timescale was way too short, for example), a study was published last year that suggested global warming has started disrupting ocean currents.1 In particular, the paper suggested that the Atlantic Meridional Overturning Circulation (AMOC) was slowing down. Since the AMOC is a “conveyor belt” of currents that move heat around the globe, the study got the media once again talking about the 2004 film.

Much like the science in The Day After Tomorrow, however, the science in last year’s study was (at best) speculative. It relied mostly on computer models as well as some “reconstructions” of surface temperatures that went back to 900 AD. Using these speculative tools, the authors claimed that their study

suggests that the AMOC weakness after 1975 is an unprecedented event in the past millennium. [emphasis mine]

Not surprisingly, a study that suggested something “unprecedented” received quite a bit of media attention. Equally unsurprising, a recent paper demonstrates that actual measurements of the AMOC indicate that there is no evidence for any kind of weakness.

Dr. Albert Parker and Dr. Cliff Ollier looked at data collected by ocean buoys that go back to 2002 as well as satellite measurements of sea levels that go back to 1993. Based on those results, they then extended their analysis back to 1856 using tide gauges whose readouts were reported in historical records. Their results provide a detailed short-term analysis of the AMOC as well as a more general long-term analysis. They state:2

…there is no undoubtable evidence of a weakening or strengthening of the AMOC, as no index returns an accurate measure of the AMOC strength over a time window long enough to clear the longer term trend of the multi-decadal variability. The most likely pattern is oscillatory about a longer term trend not sufficiently well delineated.

In other words, direct observations show that the AMOC is probably pretty stable. There are short-term fluctuations, but they even out over the long term. If there is a long-term slowing down (or speeding up) of the AMOC, it is not detectable with the data we currently have.

Interestingly enough, they quote two other papers that did independent, short-term analyses of the AMOC using different data. The first concludes:3

In contrast to recent claims of a Gulf Stream slowdown, two decades of directly measured velocity across the current show no evidence of a decrease.

Despite significant seasonal to interannual fluctuations, these observations demonstrate that substantial slowing of the AMOC did not occur during the past 7 years and is unlikely to have occurred in the past 2 decades.

So while computer models suggest that there has been an “unprecedented” slowing of the AMOC, the data do not show anything of the sort. This is just another example of the dramatic disagreement that exists between climate models and the observations they are trying to predict.

Until this dramatic disagreement comes to an end, it is sheer folly to use climate models as a basis on which to make conclusions about climate change.