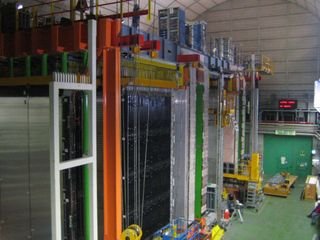 The science media is abuzz with claims that scientists at the world’s largest particle physics lab (CERN) have observed subatomic particles traveling faster than the speed of light. If this observation is confirmed, it could deal a severe blow to Einstein’s special theory of relativity, which has an enormous amount of experimental confirmation. However, the first part of that previous statement is really, really important. These results need to be confirmed, and I am rather skeptical that they will be. Even if they are confirmed, however, they don’t necessarily mean that special relativity is incorrect. That’s probably the most overlooked part of the story!

First, you need to know that the particles being studied are called neutrinos, and they are maddeningly hard to detect, because they don’t interact strongly with matter. In this experiment, the neutrinos are detected by an underground system called OPERA (Oscillation Project with Emulsion-tRacking Apparatus), which is made up of about 150,000 bricks of photographic emulsion film stacked in between lead plates. The mass of this system is 1,300 tons. It sits 730 kilometers away from the source of the neutrinos it is detecting, and those neutrinos generally take about three thousandths of a second to travel from the source to the detector.

The scientists have published an initial version of their paper, and it is impressive. Most importantly, they seem to have taken great care in keeping track of time in their experiment. After all, if the scientists are going to measure the velocity of the neutrinos, they need to know when the neutrinos are made and when they reach the detector. The difference between those two times tells them how long it took for the neutrinos to travel from source to detector, which then allows them to determine their speed. Measuring those two times is a bit tricky, however. Even though they took great pains to measure the times as well as they could, I think that’s the weak point of their experiment.

Think about it. They need to know when some particles that are 730 kilometers away were formed and when they reached the detector. How do they correlate two things that happened 730 kilometers apart from one another? Well, they use both a Global Positioning System signal and an atomic clock. Using both of these time-measuring devices in tandem gives them (theoretically) the ability to measure the neutrino travel time to within just a few billionths of a second. Now remember, the neutrinos take only about three thousandths of second to get there. However, if the system really is able to measure the time to within a few billionths of a second, there should be no problem.

So, assuming everything is working as expected, what did they find? They found that the neutrinos arrived at the detector just slightly earlier than light would have arrived there. Specifically, light should have taken about 2.4 thousands of a second to get to the detector, but the neutrinos got there 60 billionths of a second sooner. That’s not a lot, but according to their detailed analysis, the system’s total error is about 14 billionths of a second. Thus, the time by which the neutrinos “beat” light is much larger than their maximum error, which makes the measurement something that must be taken seriously.

Does this mean the neutrinos were definitely moving faster than light? Not necessarily. The error that they report is reasonable based on the design of their system and the tests that they have run. However, this is a really complex experiment, and the measured time difference is really small. Thus, it is quite possible that there is some hidden effect that makes their error greater than the 14 billionths of a second that they report. Indeed, as the authors state:

Despite the large significance of the measurement reported here and the stability of the analysis, the potentially great impact of the result motivates the continuation of our studies in order to investigate possible still unknown systematic effects that could explain the observed anomaly.

So while the result is important, even those who came up with it are still looking for some effect other than faster-than-light travel to explain it.

The “neutrinos” being detected are formed in collisions between high-energy protons and stationary carbon atoms. While we think we understand the reaction that produces these neutrinos, it could be that there is something unexpected going on in the reaction, and that effect is causing particles to be produced with an initial velocity that is faster than the speed of light. As a result, the particles being detected aren’t neutrinos at all. Instead, they are some form of tachyon.

In the end, then, this is a very interesting result, but I seriously doubt it will be confirmed. If confirmed, it doesn’t necessarily mean that special relativity is wrong. It could mean that we have finally detected the elusive tachyon! That would be quite amazing, since our current understanding of physics says that we shouldn’t be able to detect tachyons with the OPERA detector. Of course, our current understanding of physics also says that special relativity is inconsistent with neutrinos moving faster than the speed of light.

Thus, if these results are confirmed (which I doubt) we know there is something wrong with our current understanding of physics. What exactly is wrong, however, remains to be determined. Of course, that’s what makes physics phun!