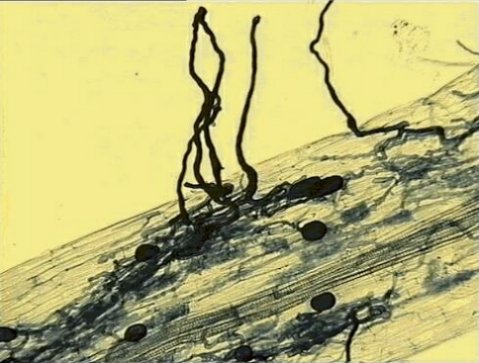 This microscope image shows an arbuscular mycorrhizal fungus in a clover plant's roots.
(Click for credit.)

The microscope picture above shows you a clover root (the mostly transparent material in the picture) whose cells have been “infected” with a fungus (the thick, dark material in the picture). At first glance, you might think the fungus is a parasite that takes nutrients from the plant, but that’s not really true. While the fungus does take nutrients from the clover, it also supplies the plant with critical nitrogen- and phosphorus-based chemicals that the plant has a hard time extracting from the soil. This is a mutually-beneficial relationship, which is often called a mutualistic relationship.

About 95% of all vascular plants develop mycorrhizae,1 and these relationships come in many different forms. For example, in the relationship shown above, the fungus forms a highly-branched structure called an arbuscule, which comes from the Latin word arbusculum, which means for “little tree.” This arbuscule is formed inside the walls of the root’s cells, and the fungus is called an arbuscular mycorrhizal (AM) fungus. Such fungi cannot exist by themselves. They can only exist as a part of a mycorrhizal relationship. There are other forms of mycorrhizae as well, but the study I want to discuss is specifically about AM fungi.

In the study, Zdenka Babikova and her colleagues wanted to see if AM fungi helped plants communicate with one another. They state in their paper that evidence has been mounting that such fungi might transport chemical signals from one plant to another, and they wanted to determine whether or not this actually happens. They set up experiments in which 5 plants were arranged in the same soil so that there was a central plant with four plants surrounding it. The roots of one surrounding plant were allowed to grow freely, and as a result, its roots mingled with the central plant. In addition, an AM fungus was in the soil, and the plants shared that fungus as well.

The scientists allowed the plants to grow for a while, and then they took one of the two plants that had the larger mesh and twisted it so as to break the connection it had with the fungus. As a result, they had a central plant surrounded by four other plants. However, each of the surrounding plants had a different “connection” to the central plant:

They then infected the central plant with aphids. The central plant did exactly what the researchers expected. It attempted to defend itself by releasing chemicals that repel the aphids and attract wasps, which prey on the aphids. Guess what? The first two plants in the list above also started producing the same chemicals, even though they were not infected with the aphids. The last two on the list did not produce the chemicals. What does that tell us? It tells us that most likely, the plants were using the fungus to communicate! After all, the first two plants were connected to the central plant by the fungus, but the last two were not, at least not once the aphids were added. As the authors state:2

We present the first experimental evidence that herbivore-induced signalling molecules can be transferred from plants infested with aphids to uninfested neighbours via a common mycelial network. [Note: A “mycelial network” is the network of filaments that make up the body of a fungus.]

So the plants can use the filaments in the body of a fungus to communicate with one another, letting others in their group know about impending danger! In other words, the fungus serves as a network that links the plants together, allowing them to communicate. What does that sound like to you? It’s an underground internet, and it existed long before the internet you are currently using did!

I think God designed his creation to work together, and I think that the mutualism we see today is a reflection of that design. Here we see yet another reason God might have designed living organisms to cooperate – so that communication can be enhanced! As time goes on, I suspect we will learn that many other forms of communication take place via this underground internet, and while Al Gore might one day say he took the initiative in creating it, I think it is clear who really deserves the credit!