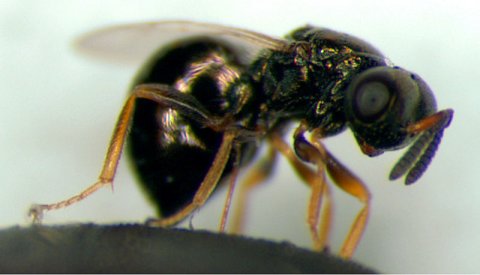 It has long been known that the species of jewel wasp pictured above (Nasonia vitripennis) can mate with another species of jewel wasp (N. giraulti), but the male offspring die in their larval stage. This, of course, keeps the species separate. Scientists have always assumed that the death of the male larvae must have something to do with an incompatibility between the two species at the genetic level. However, a recent study indicates that’s not true. The real reason the males die off is because their bacteria are incompatible with them.

Each species has bacteria living in its gut, helping it digest food, fight off infection, etc. However, the actual mix of bacterial species is different in each wasp species. When male larvae that came from the interbreeding of the two species were given antibiotics to kill off those bacteria, the larvae were able to survive. They weren’t incredibly healthy, but they were as healthy as purebred wasps that also had no bacteria living inside them. However, when bacteria from either species were introduced back into the larvae that came from interbreeding, they died! In the end, then, the males don’t die because of genetic incompatibilities. They die because of bacterial incompatibilities. As ant taxonomist Dr. Corrie Moreau commented:1

I would never have predicted that…We were blown away.

So in some way that we don’t currently understand, the bacteria that live in the gut of these two species of jewel wasps so fundamentally affect their development that the wasps cannot survive unless they are compatible with a specific mix of bacteria. Interestingly enough, this isn’t the only case of bacteria affecting the development of an animal. 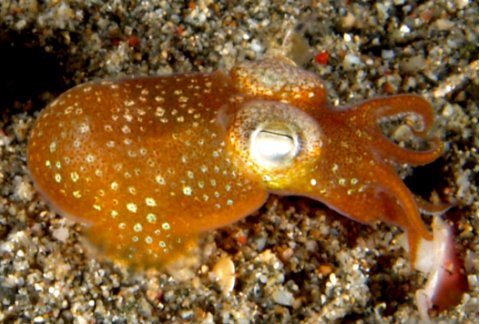 This Hawiian bobtail squid's light organ development depends on the presence of bacteria.
(Click for credit)

The Hawaiian bobtail squid pictured above has bacteria (Vibrio fischeri) living in its “light organ.” These bacteria glow at night, so that while the squid is swimming, predators don’t see the shadow that would be cast by the moon. When scientists studied the developing embryos of these squid, they noticed that a sticky, hairy pouch forms in the body cavity, and the bacteria that would later glow for the squid accumulate there. The pouch then develops into the squid’s light organ.

However, when scientists kept the bacteria away from the developing embryos, the pouch just disintegrated, and the light organ never developed. In other words, the light organ seems to be “programmed” to develop only when bacteria are around to populate it. If the bacteria aren’t around, the embryo doesn’t waste the energy needed to make the light organ! As Elizabeth Pennisi (a writer for the journal Science) says:2

This example of Vibrios as midwives for the formation of an animal organ raises the provocative and, until recently, largely unaddressed question: How much do microbes shape normal animal development?

As scientists start to address this question, I think the answer will turn out to be, “A lot!” As a creationist, I think the earth and everything in it was created according to God’s grand design, and relationships are fundamental to that design. Now, of course, the Fall has marred that design a bit, and as a result, some of those relationships have been corrupted. Because of this, we won’t be able to get a complete picture of how nature was designed to work in the beginning. Nevertheless, the deep relationships we see between different organisms gives us some hint of what the original creation was like.