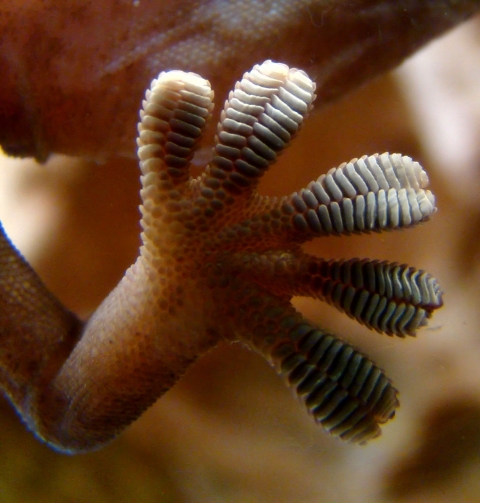 Geckos are lizards that have an uncanny ability to crawl on virtually anything. They effortlessly climb up glass windows without slipping, and they can even crawl on a smooth surface when they are upside down! What gives them this incredible ability? A popular chemistry textbook explains it this way:1

…the gecko uses van der Waals forces to attach itself to surfaces and employs a special technique to disengage from that surface. Van der Waals forces exist between any two surfaces, but they are extremely weak unless relatively large areas of of the two surfaces come quite close together. The toe of a gecko is covered with fine hairs, each hair having over a thousand split ends. As the gecko walks across a surface, it presses these stalks of hairs against the surface. The intimate contact of a billion or so split ends of hairs with the surface results in a large, attractive force that holds the gecko fast. Just as easily, a gecko’s foot comes cleanly away. As the gecko walks, its foot naturally bends so the hairs at the back edge of its toes disengage, row after row, until the toe is free.

The best way to understand what I mean is to look at a bit of history. Back in 1904, German scientist H.R. Schmidt thought that perhaps the gecko employed electrical charges to stick to surfaces. After all, opposite charges attract one another, so if a gecko could induce its feet to develop one charge and the surface to develop the opposite charge, the resulting attractive force could hold the feet to the surface.

About three decades later, another German scientist, Wolfgang-Didrich Dellit, did a simple experiment to test that hypothesis. He shot X-rays at the air surrounding a gecko’s feet while it was on a smooth metal wall. Those X-rays should have ionized the air around the gecko’s feet and neutralized any charge on the wall’s surface. This would have negated any electrical force between the gecko’s feet and the wall, and the gecko should have fallen off the wall. However, after repeated attempts, he couldn’t get a gecko to even slip.2 As a result, scientists ruled out the possibility that electrical charges had anything to do with a gecko’s climbing ability.

Dellit also tested other possible explanations, including that geckos used suction to hold to surfaces, and each was ruled out. Eventually, electron microscopes were used to analyze gecko feet. Once the toe hairs and their “split ends” were seen, the van der Waals forces explanation given by the chemistry text I quoted above was suggested. In the year 2000, a study in Nature confirmed the explanation. It directly measured the force of a single hair from a gecko’s foot, confirming that van der Waals forces were at play.3 As a result, van der Waals forces have been considered the complete explanation for a gecko’s remarkable climbing ability…until now.

A paper published in July of last year announced that Dellit’s 1934 paper probably didn’t come to the correct conclusion. The authors realized that because the hairs on a gecko’s feet are so tiny and press so snugly against the surface on which the gecko is climbing, X-rays probably couldn’t ionize the air right in between the hairs and the surface. As a result, they went back to Schmidt’s hypothesis from 1904 (that electrical charges play a role in a gecko’s climbing ability).

To test the hypothesis more thoroughly, the researchers measured how well gecko feet stuck to two different surfaces. The chemical makeup of both surfaces indicated that they should have roughly the same level of van der Waals attractions to the hairs on a gecko’s feet. However, one surface developed static electrical charges more easily than the other. Surprisingly, the gecko’s feet stuck much more strongly to the surface that was better at developing static electrical charges.

This isn’t at all surprising. A good designer would rely on multiple clinging mechanisms when designing a climbing machine. That way, the climbing machine would work on a wider variety of surfaces. Since the gecko’s ability comes from the Ultimate Designer, I wouldn’t be surprised if later studies show yet another mechanism that geckos employ while climbing.

I would add one more thing before I close. This story illustrates a very important lesson about the nature of science. Often, scientists “rule out” an explanation because of one (or a few) experiments. However, those experiments might be faulty, so what one generation of scientists “rules out” might be re-investigated by a new generation of scientists and be shown to have some validity. As a result, a hypothesis might be old and rejected, but that doesn’t mean it’s wrong. Scientists shouldn’t be afraid to bring back old ideas and test them from time to time. As the gecko clearly shows us, some rejected hypotheses do have merit.