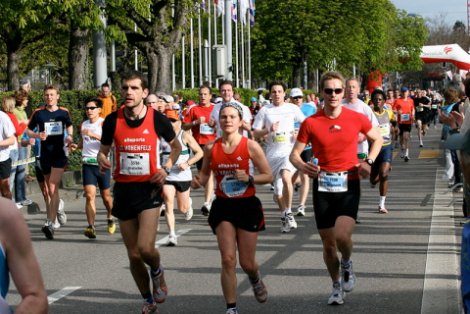 Runners in the Zurich Marathon of 2008. Click Image for credit.

An infrequent but enjoyable commenter (Black Sheep) recently asked a question that I thought I would answer with a post. The relevant portion of the comment is:

A friend and I are always puzzled by the way our bodies, or rather minds, react after a run. This really only tends to happen when we do longer runs, like when we were training for a half marathon. After we finish, whether it be a race or just a training run, we feel completely stupid…why the diminished mental capacity?

Some might argue that a person who wants to do such a long run is actually starting out with a diminished mental capacity. However, there is actually a very good reason for why you can feel stupid after a long run, even if you started with a keen mind. You will find the answer below the fold.

Your body is an amazingly efficient biological machine, and like any machine, it needs a source of energy. Most machines designed by humans utilize only one source of energy, but your body is better designed than anything built by people. Your body can utilize three different energy sources: carbohydrates, fats, and proteins. These energy sources are collectively called the macronutrients, and each one has its own purpose in the body.

Carbohydrates are the “catchall” fuel for the body. They are digested down to simple sugars, which are generally converted into a specific simple sugar known as glucose. All cells in the body can use glucose as a fuel. When your body has excess glucose, it strings those glucose molecules together to make a very long carbohydrate known as glycogen. This stores the glucose for later use.

While carbohydrates are an excellent all-around fuel, they do not store energy as efficiently as the body would like it to be stored. Thus, the body uses glycogen only as a short-term means of energy storage. When you eat a large excess of food (something I am quite fond of doing), your body converts a lot of it into fat. Fat can store more than twice as much energy per gram as carbohydrates, so your body uses fat for long-term energy storage.

Of course, you can eat fat, too. Your body breaks down the fat you eat into smaller units called fatty acids. If your body needs fuel right away, it can burn those fatty acids. Otherwise, it will take those fatty acids and use them to make more fat for long-term energy storage. Once the fat is stored, it takes time for the body to convert it back into fatty acids that can be burned for fuel. As a result, your body will use its fat stores only once it has run out of other readily available sources of energy.

The third macronutrient, protein, can be used for fuel, but that’s not its primary purpose. When you eat protein, your body breaks it down into smaller units called amino acids, and those amino acids get shipped to all the cells in your body. Every cell has to make a host of proteins in order to live and do its job, so each cell uses those amino acids to build the proteins it needs. The main reason you eat proteins, then, is to get their building blocks (amino acids) so your cells can make their own proteins.

In general, your body will only burn proteins for energy when you have a large excess of them, or when they are the only thing left. For example, muscle is composed almost entirely of protein. When you start working your muscles hard, they might run out of carbohydrates and fatty acid molecules. When that happens, they will burn proteins for energy until they are given more fatty acids or carbohydrates.

While I have glossed over many details, that is the general scheme for how most of the cells in your body use fuel so they can do their jobs. However, this discussion doesn’t apply to the cells in your brain, which are called neurons. Neurons are very sensitive cells that use a lot of energy, but they can only use glucose as a fuel. When the body runs out of glucose, then, the neurons cannot function well.

When you start out on a run or other workout, your body first burns the macronutrients that are readily available in your cells and in your blood. After that, it is forced to start drawing on its reserves. Because glycogen can be easily converted back to glucose, your body relies heavily on its glycogen storage. However, remember that glycogen is only a short-term storage solution. As a result, on a long run, you will eventually deplete all of your glycogen reserves.

There comes a point, then, when all your stored carbohydrates are gone. Your muscles can still work, however, because they can burn their proteins for fuel, and they can burn fatty acids that your body pulls from its fat storage. Your neurons, however, can’t burn either of those fuels.

Does that mean your neurons starve to death once you run out of glycogen reserves? No, because your body is cleverly designed. It has a last resort mechanism. It can convert proteins into glucose. This takes time, however, so your neurons don’t get all the energy they need. Instead, they get a slow, steady flow. To conserve energy, then, many neurons that are not involved in the absolute essentials of life (like running your circulatory and respiratory systems) reduce their activity. This reduces your ability to think. If you really push the limits of your body’s metabolism, you can actually reduce the activity of enough neurons that you go into a sort of “waking dream” state where you lose most of your ability to think rationally, and you even start hallucinating.

So in the end, you can feel stupid after a long run because you have run through all your body’s carbohydrates, and the only way your brain cells can get the fuel they need is through the relatively slow process of turning proteins into glucose. This requires your brain to reduce the activity of many neurons, making it harder for you to think clearly.

You can mitigate this problem by making sure you have maximized the amount of glycogen stored in your body to begin with. This is typically done by eating a carbohydrate-rich meal a couple of hours before you run. You can also take some carbohydrate gels to eat while you run. You can’t get too many carbohydrates that way, however, because it is difficult for your digestive system to digest a lot of food while you are running. However, it can still help reduce the amount of “brain drain” that comes from a very long run.