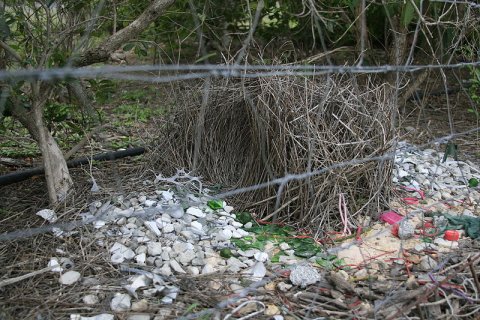 A Bower Built By a Bird (image from http://commons.wikimedia.org/wiki/File:Bowerbird_bower4.jpg)

Bowerbirds are incredible. They have a complex courting ritual in which the male builds a bower (such as the one pictured above) in order to attract a mate. The bower is often quite elaborate, and it is usually decorated with all manner of objects, such as flowers, shells, stones, feathers, and small fruits. Male bowerbirds will even include human-made objects like bottlecaps, coins, and pieces of glass in their decor. Females that are interested in the bower will watch the male put on his courtship display in the “court” of his bower, and she will also inspect details of the bower to determine whether or not the male is worthy of her. If she mates with the male, she will not use the bower as a nest. Instead, she will build her own nest to hatch and raise her young. Thus, the only purpose of the bower is for the male to attract a mate.

If the picture above doesn’t impress you with regard to the male bowerbird’s artistic prowess, consider this: In 1872, naturalist Odoardo Beccari was the first to record observations of a bowerbird’s bower. He thought it was made by a person, because he considered it too artistic and elaborate to be the work of an animal.1 Not surprisingly, as biologists have studied bowerbirds in more detail, they have become even more impressed with the artistic prowess of this amazing animal.

John A. Endler, Lorna C. Endler, and Natalie R. Doerr recently studied the bower-making process of Great Bowerbirds (Chlamydera nuchalis).2 As had been noticed before, the male birds build their bowers in such a way as to force the female to view the court of the bower from only one angle. Look, for example, at the bower pictured above. To see the male, the female must look through the “tunnel” of sticks. The stone “floors” on either side of the tunnel serve as the male’s “court.” The tunnel, then, forces the female to look at the male from only one angle.

Analyzing the bower from this viewpoint, the biologists noticed something that others had missed. When building the bower, the male decorates with objects whose size increases with increasing distance from the tunnel. This produces an an aesthetically-appealing view of the court, but the investigators think it does something even more amazing. If the female birds see things essentially as a person sees things, this mode of decoration makes the male bowerbird appear larger while he is in his court. In other words, the male bowerbird constructs an optical illusion in order to impress his potential mate!

Of course, the question that immediately comes to mind is whether or not the male bird really understands this. In order to attempt to answer that question, the biologists decided to mess with the birds’ designs. Once the bower was built, the authors rearranged the objects used in the decor when the male was not present. They put the smaller things farther from the tunnel and the larger things closer to the tunnel. Within three days, the male birds noticed this and rearranged the objects so they once again increased in size the farther they were from the tunnel.

So not only do these amazing birds build impressive bowers to attract a mate, they essentially build a stage that forces the female to watch them from an angle that enhances their courtship display. God’s creation continues to amaze me!