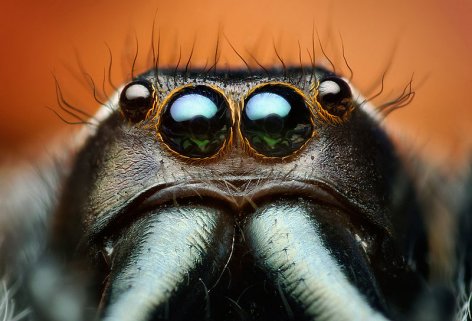 This photo shows four of the eight eyes on a jumping spider. The middle two are the principal eyes, and the other two are the anterior lateral eyes (ALEs). (click for credit)

Most spiders have eight eyes, and their arrangement varies depending on the type of spider. In fact, when studying a spider, scientists often use the number and arrangement of the eyes to help them classify the specimen.1 What does a spider do with all those eyes? Well, in the case of a jumping spider, we know that the two large eyes near the center of the head are the spider’s principal eyes. They can see sharp images, are sensitive to color, and can move to track a target.

The eyes that are right next to the principal eyes are called the anterior lateral eyes (ALEs). They cannot move, do not seem sensitive to color, and as far as we can tell, don’t really allow for the spider to see images. Instead, it has always been thought that these eyes help the spider detect motion.2 But what about the principal eyes? Do they detect motion as well? Three researchers decided to determine the answer to that question by conducting a interesting experiment with some spiders and an iPod touch.

They ended up using removable paint to “blind” specific eyes of jumping spiders from the species Phidippus audax. For 16 of the spiders, they used the paint to “blind” only the principal eyes. They then used the paint to “blind” only the ALEs of 14 other spiders. Finally, they used 16 spiders with none of their eyes “blinded” as a control group. One at a time, they put the spiders in an “arena” that had four walls. Three were foam-core walls, and the fourth wall was the screen of the iPod touch. They allowed each spider to acclimate to the arena and waited for its head to face the screen. When that happened, they remotely started an animation of a black circle either looming towards the spider or retreating from the spider. The results they got were quite interesting.

The results indicate that spider eyes have functions that are rather well delineated, and this surprises me. After all, since the principal eyes have sharp vision, I would expect them to give the spider information regarding motion. However, they don’t seem to, at least not when it comes to looming or receding. If they did, the spiders with their ALEs blinded but their principal eyes working would have been more likely to react to the animation. As the researchers say:

Our results show that the AL eyes alone mediate the loom response to objects anterior to the spider.

So why am I writing about this? First, I think it was a clever experiment, and I think the results are very interesting, since they go against what I would expect. Second, I just think it’s really cool that the experiment used an iPod touch. This is the first scientific paper I have read that refers to the iPod and various programs related to it:

We created looming and receding solid black circles in Adobe Flash for Macintosh and presented them on an iPod Touch (Apple Inc., Cupertino, CA). Animations were exported as .mov files (32 frames per second), opened in Apple iTunes, and converted to MPEG-4 for iPod compatibility.

Good experimentalists find a way to use what is readily available rather than spending a lot of time trying to “re-invent the wheel,” and that’s what happened here. If you are interested, you can see a quick video of the experimental setup and how one spider behaved in the experiment.