The extent of sea ice in the Arctic. (Click for credit and larger image)

Those who believe that global warming is happening and is caused by people are constantly making predictions about what will happen in the future. Those predictions, however, generally turn out to be incorrect. Not long ago, for example, I showed how miserably the predictions of the United Nations’ Intergovernmental Panel on Climate Change compare to the data, even those that are most friendly to the global warming hypothesis. Well, now that the September equinox has passed, the Northern Hemisphere has officially moved out of summer and is experiencing Autumn. As a result, we can confidently declare that yet another prediction made by global warming advocates has failed.

I doubt that you’ll see this reported in many news outlets, but way back in 2007, Dr. Wieslaw Maslowski, a research professor in the Department of Oceanography at the Naval Postgraduate School, stated that based on his research, the Arctic would be ice-free by the summer of 2013. His prediction was based on a “high-resolution regional model for the Arctic Ocean and sea ice forced with realistic atmospheric data,” and he thought it might be a bit conservative. In fact, he said:

Well, as you can see from the graph above, Dr. Maslowski’s “too conservative” prediction has failed miserably. Not only is there ice in the Arctic, there is significantly more ice than there was in 2012. Now, of course, the amount of ice is still way below the average, but it is also way above zero, the prediction that Dr. Maslowski thought might be “already too conservative.”

Now to be fair, Dr. Maslowski did have a caveat in his prediction. He also said:

In the end, it will just melt away quite suddenly. It might not be as early as 2013 but it will be soon, much earlier than 2040.

So even though he said that his 2013 prediction was probably too conservative, he did add a fudge factor, giving himself an additional 26 years just in case the 2013 prediction failed. Of course, I am willing to predict right now that the Arctic will not be ice-free in 2040, and that the ice will not “melt away suddenly.” I honestly don’t know how anyone who studies the earth can think such a thing, since the earth has been designed with all sorts of negative feedback mechanisms specifically to keep it from experiencing rapid environmental changes (see here, here, here, and here, for example). 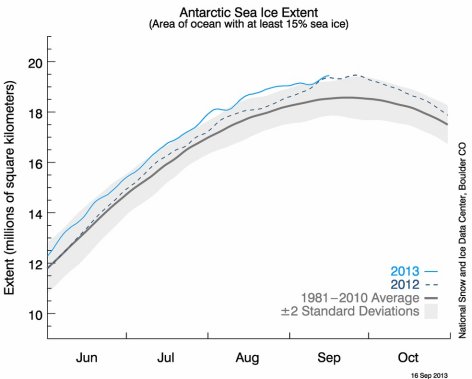 The sea ice extent in the Antarctic. (Click for credit and larger image)

So in the end, whatever is happening to sea ice in the Arctic is not a global phenomenon. As a result, the simplistic notion that global warming is melting the ice in the Arctic is probably not correct. Most likely, the explanation is much more complex, which is exactly what you would expect for an incredibly well-designed system.