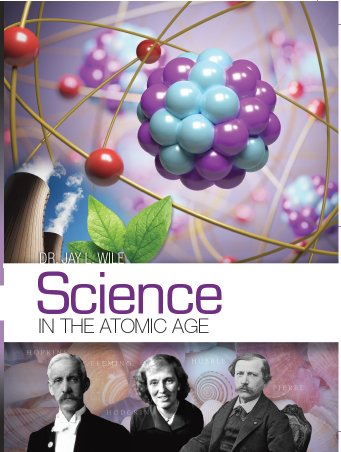 The pandemic delayed it, but Science in the Atomic Age has finally been finished and is available for purchase! The course is targeted at 7th/8th grade, depending on the student’s math level and experience with science. In general, students who are two years from starting algebra and have covered at least a couple of years’ worth of elementary science should take this course. Most publicly-schooled students would take a course like this in 8th grade, but homeschooled students at this age are generally a grade level ahead of their publicly-schooled counterparts. While it can be viewed as a continuation of my Science Through History series, students who have covered elementary science in some other way can use it as well.

The course is arranged so that students get a general introduction to science. It does this by exploring science through the levels of organization found in creation. First, it covers the atom. Students learn not only how scientists currently view the atom, but also how scientists arrived at that view. Throughout the discussion, I emphasize the way scientists dealt with the unknown. When Bohr proposed his model, which was based on quantum theory, he freely admitted that it was crazy, but he thought it had some merit because it could explain experimental results that no other model could explain. I share one of his iconic quotes with the students:1

Anyone who is not shocked by quantum theory has not understood it.

I try to emphasize that Bohr couldn’t explain how his model was consistent with the science that was known at the time. However, he was forced to think it had merit because it was so successful at explaining and predicting the results of experiments.

I then move on to molecules, the next level of organization in creation. Students learn about how elements come together to form both ionic and covalent compounds. Along the way, they learn that our modern theory of chemical bonding is based on an incorrect model proposed by Gilbert Lewis. Despite the fact that his model was incorrect, he ended up stumbling on a very important principle that guides our current view of how and why molecules form. As a result, one of the main tools we use to understand the basic structure of molecules is named after him. We call it the “Lewis structure,” and students learn how to construct the most basic version.

Students then learn the next level of organization in creation: the cellular organelle. Once again, students learn the history of how we discovered the major organelles, and they see how scientists dealt with the unknown as it was being investigated. With a basic knowledge of cellular organelles, students then learn about cells and cell theory, which represent the next level of organization in creation.

Of course, cells come together to make tissues, so students learn the basics of what tissues are. They use that knowledge to learn about the next level of organization: tissues combining to make organs. That leads to the next level: organ systems. The human body is the main setting in which students learn about these levels of organization, so by the time students have covered tissues, organs, and organ systems, they have a good understanding of the human body. Because of the age of the target audience, the reproductive system is not covered.

Organ systems make organisms, the next level of organization. Organisms group together to form populations. Populations then form communities, which then form ecosystems, which then form biomes. Biomes come together to form the biosphere, which is earth. In each of these levels of organization, the design that is apparent in nature is emphasized. In fact, when students learn about the biosphere, they learn about scientists’ attempt to design their own biosphere, which was called “Biosphere 2.” Students learn why it wasn’t successful, illustrating that even with millions of dollars and years to plan and implement, human design is positively crude compared to God’s designs.

Because I am a young-earth creationist, there are a few references to the science that points to a young earth. When I discuss the Scientific Method, for example, I discuss Russel Humphreys’s model for planetary magnetic fields, which is the only model that has made successful predictions about planetary magnetic fields that were unknown at the time of the prediction. I also mention that his model requires a young earth. When discussing tissues, I show students soft cells recovered from dinosaur fossils (courtesy of the Dinosaur Soft Tissue Research Institute). I show them to illustrate that we know the tissue they come from because the cells are characteristic of it. However, I also mention that these cells are strong evidence that the fossils are not millions of years old. Also, when discussing populations, I discuss extinction. I make the point that many organisms were thought to be extinct based on their fossil record, but we now know they are not. I discuss how this is evidence that there is something wrong with the old-earth interpretation of the fossil record. These are the only references to the age of the earth, and they make up less than 5% of the text.

Like my elementary courses, this course is very hands-on. There are 59 experiments or hands-on activities in the course, and they use common, household items. Some of my favorites include an example of what happens when there is too much oxygen in the air, using Scrabble tiles to illustrate the myelin sheath’s function in nerves, a quick version of the “rubberized bone” experiment, using pencils and a candle to see diffraction, and comparing how vegetable oil freezes to how water freezes. Throughout the reading, students must answer “Comprehension Check” questions. They are told that once they answer a set of those questions, they are done for the day. That way, they know when to stop doing science each day, and they know where to pick up their studies on the next school day.

If you would like to see some samples of the course, you can go to the publisher’s website. Scroll down and click on “Product Resources.” There, you will find a link to a “Text Sample,” which is the entire second chapter. The first chapter is short and very basic, teaching students how to perform and document experiments. The second chapter is more reflective of the book’s rigor, which is why the publisher shows it as the sample. Also, I have posted two short excerpts from the book here and here.

8 thoughts on “Science in the Atomic Age is Now Available!”