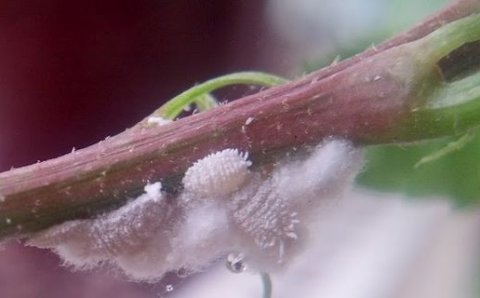 Mealybugs feeding on a hibiscus plant (Click for credit)

As anyone who has been reading this blog for a while knows, I am fascinated by the phenomenon of symbiosis: two or more species living together in a relationship. In my opinion, the most interesting form of symbiosis is mutualism: two or more species living together in such a way that each species benefits. I have written several different articles about it over the years (see here, here, here, here, and here, for example), and I personally think it is a picture of what creation was like before the Fall.

The Doctor:In a forest, in a box, in a sitting room. Pay attention!”

Why do these two bacteria have such small genomes? Because they don’t have to perform all the functions of life. They live inside the mealybug, receiving both food and housing. As a result, they don’t need to do all the things that free-living bacteria (like Escherichia Coli) do. They just need to help the mealybug make its amino acids and eat the food that the mealybug provides for them.

Since the authors believe in evolution, they think that these bacteria were probably once free-living but were incorporated into the mealybug millions of years ago. At that time, of course, their genomes were a lot larger. However, as the relationship between the three species evolved, the two bacteria began losing a lot of the genes they didn’t need. That’s why their genomes are so small today – evolution removed most of the unnecessary genes. Here’s the problem, though: evolution also removed some of the necessary ones! The genomes of these two bacteria don’t make everything they need, even after considering what the mealybug does for them.

So how do the two bacteria survive? The mealybug has the extra genes they need. The authors first thought that perhaps in the course of evolution, the bacteria transferred those genes to the mealybug. However, their analysis doesn’t support that idea. They found 22 genes (actually, they say there may be more) in the mealybug that resemble bacterial genes, and the majority of them are necessary for the survival of the two bacteria that live inside it. However, none of those genes have the sequences you would expect if they came from those two bacteria! Instead, they have sequences that are similar to other species of bacteria.

In my mind, there is a more reasonable explanation. The mealybug has always been designed to live with these bacteria. As a result, its genome was created with some genes that the bacteria need, and the bacteria were created with some genes that it needs. In my mind, this gets rid of the need to believe in unlikely events. After all, how likely is it that an infecting bacterium would just happen to transfer a gene to the mealybug that its mutualistic bacteria need? Furthermore, how likely is it for that to happen at least 22 times?

As I have stated before, I think the best explanation for bacteria and viruses is that they were created to live in relationships with other organisms, allowing those organisms to have access to the rich chemistry that is available from the surroundings. The mutualism we see today is a reflection of that. Once the Fall happened, however, some of the mutualistic bacteria and viruses were subject to mutations, and they eventually mutated to the point where they lost their ability to help other organisms. As a result, they became pathogenic.

I think the more we investigate mututalism, the more clear this will become.