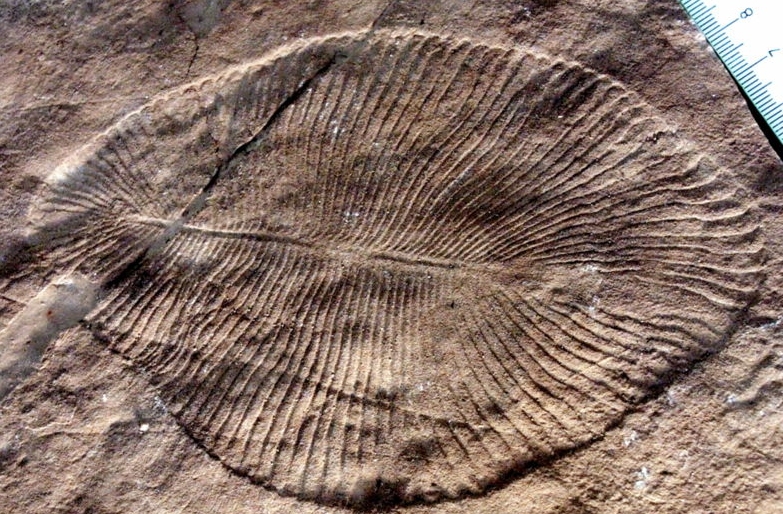 A fossil similar to the one in which cholesterol remnants were found. (click for credit)

The research was done by a team of scientists from Australia, Russia, and Germany. They collected Dickinsonia fossils from Ediacaran rock found on a cliff near the White Sea in Russia. This rock is thought to be 558 million years old. They found a thin layer of organic film on top of the fossils, and they chemically analyzed that film. They found cholestane, which is a chemical remnant of cholesterol. It is important to note that they didn’t find cholesterol itself. They found a decay product that indicates the one-time presence of cholesterol.

Why is this important? Cholesterol is a common component of animal cells, but significant amounts of it are not found in lichen, protozoa, or fungi. Thus, the one-time presence of cholesterol indicates that these fossils were animals. But couldn’t the cholestane be contamination? That’s a possibility, so the researchers chemically analyzed the rocks surrounding the fossils. In those rocks, they found little cholestane. Instead, they found the remnants of steroids that are commonly found in algae. So the cholestane is definitely associated with the fossils themselves and is probably not the result of contamination.

If a large number of the Ediacaran fossils end up being classified as animals, I think that will add to the long, long list of problems with flagellate-to-philosopher evolution. Since these fossils are supposed to have come before the better-known fossils found in the Cambrian, they would represent either the animal ancestors of the Cambrian organisms or some evolutionary offshoot that came from those animal ancestors. Either way, evolutionists are now faced with the task of trying to figure out some fairly close evolutionary relationship between the Ediacaran organisms and the Cambrian organisms. Given that these two sets of fossils are so radically different from one another, I suspect that will be a daunting task!