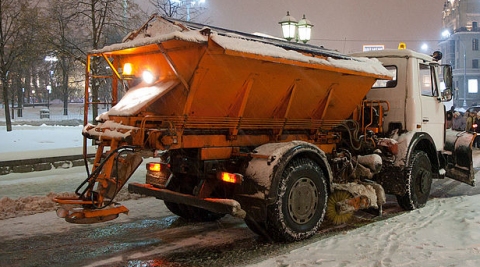 A snow plow spreads salt to melt ice on the road. (click for credit)

Living in Indiana, I see snow plows spreading salt on the roads every winter. I don’t think much about them, because I have seen them all my life. However, I ran across an interesting study that indicates the salt they spread actually affects some of the insects that live near the road. Sodium chloride (the main ingredient in road salt) is such a ubiquitous chemical in nature that I never thought about how road salt might affect the flora and fauna that live near the side of the road, but the study indicates that for butterflies, the effect is significant.

The authors studied flora near the side of salted roads and found that the amount of sodium in the plants can be as much as 30 times what exists in the same plants that live more than 100 meters from the side of the road. That’s not very surprising, since most roads get salted quite a bit, especially during winters with lots of snow and ice. The surprising aspect of the study is the profound effect these elevated salt concentrations had on monarch butterflies that eat roadside milkweed while they are caterpillars.

The authors found that compared to monarch butterflies that ate milkweed plants in prairies far from the road, the male monarchs that ate salted roadside milkweed had much stronger flying muscles. The females were different, however. They had larger eyes than their prairie-raised counterparts.1 To confirm that it was really the salt having this effect and not some other chemical that might be found near the roadside, the authors reared cabbage white butterflies in the lab. They saw exactly the same effect – the males that ate a high-salt diet had stronger flying muscles, while the females had larger eyes.

Now, of course, the real question is whether or not this is good for the butterflies. People need salt, but too much salt can lead to all sorts of health problems. However, the butterflies that ate a high-salt diet in the study seemed to be better off. After all, stronger flying muscles help the males find mates and escape predators, while larger eyes allow the females to see danger better. Larger eyes could also mean larger brains, which is generally considered a good thing.

In addition, specific behaviors that are seen in some insects (including butterflies) indicate that they get as much salt as possible when they have the opportunity. It’s not uncommon, for example, to see lots of butterflies drinking from a mud puddle. This behavior is called puddling, and it is one way that butterflies get the salt and other necessary chemicals they need. Butterflies and other insects are even known to drink the tears of other animals to get salt.2 In this video, you can see a remarkable example of such a behavior – a butterfly and a bee are shown drinking the tears of an alligator!

So are the butterflies that grow up on salted roadside plants just taking advantage of a good thing, or are they harming themselves in the long run? The authors don’t know. A news story about this study says:3

So is road salt good for butterflies?, “I do not want that to be the take-home message,” Snell-Rood [the study’s lead author] says. Instead, she says, the study demonstrates for the first time that road salt can alter how animals develop. But too little is known to judge whether the effects of those alterations are harmful or beneficial.

In the end, further studies will have to make that determination. For right now, the take-home message is that some activities to which we don’t even give a second thought can affect some animals in a significant way.