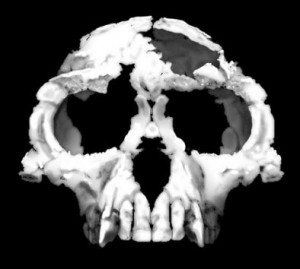 Skull Reconstruction of Ardi
from http://commons.wikimedia.org/wiki/File:Ardi.jpg

In a recent issue of Science, there are a couple of short articles (called “Technical Comments”) about Ardipithecus ramidus. If you don’t remember this fossil, nicknamed “Ardi,” it was originally discussed in an October 2009 issue of the same journal.1 It was a collection of severely-crushed and poorly-fossilized remains that took more than 15 years to analyze. This analysis included a digital reconstruction of large portions of the skeleton. The skull pictured here, for example, is a digital reconstruction based on the crushed bones that were found.

At the time, Ardi was hailed as an amazingly important discovery, because the authors of the study claimed that the fossil’s features clearly showed it was a part of the supposed evolutionary lineage between an apelike ancestor and modern man. Indeed, Science called it the “breakthrough of the year” and said:

Even the earliest members of her species, Australopithecus afarensis, lived millions of years after the last common ancestor we shared with chimpanzees. The first act of the human story was still missing. Now comes Ardi, a 4.4-million-year-old female who shines bright new light on an obscure time in our past.2

The short articles I mentioned above disagree with some of the conclusions of the original studies on Ardi.

One of them argues that the original interpretation that Ardi lived in a wooded environment is wrong.3 The other one I find to be much more interesting. It argues that Ardi is not a part of the supposed evolutionary lineage of modern humans. Instead, it places the fossil before the supposed time when apes and humans split from their common ancestor.4

Now the fact that some paleontologists disagree with the conclusions of those who originally analyzed the Ardi fossil is not surprising. Indeed, disagreement about the meaning of data is an integral part of the scientific process, and thus such arguments should appear in the scientific literature. However, what I find interesting about the second article I mentioned is a comment the author makes at the end:

…it is curious that in a century-old race for superlative hominid fossils on a continent currently populated with African apes, we consistently unearth nearly complete hominid ancestors and have yet to recognize even a small fragment of a bona fide chimpanzee or gorilla ancestor.

When a paleontologist wants to see something in a fossil, he or she usually ends up seeing it.

4. Esteban E. Sarmiento, “Comment on the Paleobiology and Classification of Ardipithecus ramidus,” Science 328:1105, 2010. Available online with subscription
Return to Text