In 2011, Answers in Genesis published a book entitled Already Compromised. It was based on the results of an interesting poll. The pollsters (America’s Research Group and Britt Beemer) attempted to contact four faculty/staff members (the university president, the academic dean, the head of the science department, and the head of the religion department) at 200 different Christian colleges and universities. Of those potentially 800 people, they ended up being able to interview 312. They asked a wide variety of questions, focusing on how those individuals interpreted different aspects of the Bible. The results are presented in the book, along with ample commentary.

The conclusion of the book is that many Christian colleges and universities have “compromised” their theology, subordinating the teachings of the Bible to the scientific consensus. In other words, they have decided that they must force their interpretation of the Bible to “fit” the scientific consensus, which includes flagellate-to-philosopher evolution and a billions-of-years-old earth.

Now please understand that I do not agree with the conclusion of the book. I don’t think that those who believe the earth is ancient or that God has created through evolution are necessarily “compromising” their theology. Non-literal interpretations of various parts of the book of Genesis can be traced all the way back to (and before) the beginning of Christendom, and there are literal interpretations of Genesis that result in conclusions other than young-earth creationism. Thus, the whole idea that people who disagree with me when it comes to natural history are “compromised” is absurd.

Despite the fact that I disagree with the book’s conclusions, I am interested in the results of its poll, especially the one highlighted in the graphic above. According to the poll’s results on this issue, the heads of the science department in these 200 Christian colleges and universities are nearly four times more likely to be young-earth creationists than the heads of the religion department!

END_OF_DOCUMENT_TOKEN_TO_BE_REPLACED

One of the more stunning examples of a confirmed creationist prediction is given by the nature of DNA. Since the 1970s, evolutionists have taught (as an indisputable fact) that the majority of the human genome is made up of useless stretches of nonsensical sequences which have been collectively referred to as “junk DNA.” However, in a Herculean study of human DNA, the ENCODE team demonstrated that a minimum of 80% is used by the cell and therefore should not be referred to as “junk.” One of the scientists on the team (Dr. John A. Stamatoyannopolous) stated:

Actually, there were several scientists predicting this very result! Creationists have been doing so for years.*

Well, now that we know the vast majority of the human genome is functional, some scientists have removed the evolutionary blinders from their eyes (at least when it comes to the nature of DNA) and have begun to look at regions of the DNA that scientists have been assuring us could not possibly have any function whatsoever. When they study such regions, they (not surprisingly) find that those regions do have a function, and it is often a very important one.

END_OF_DOCUMENT_TOKEN_TO_BE_REPLACED 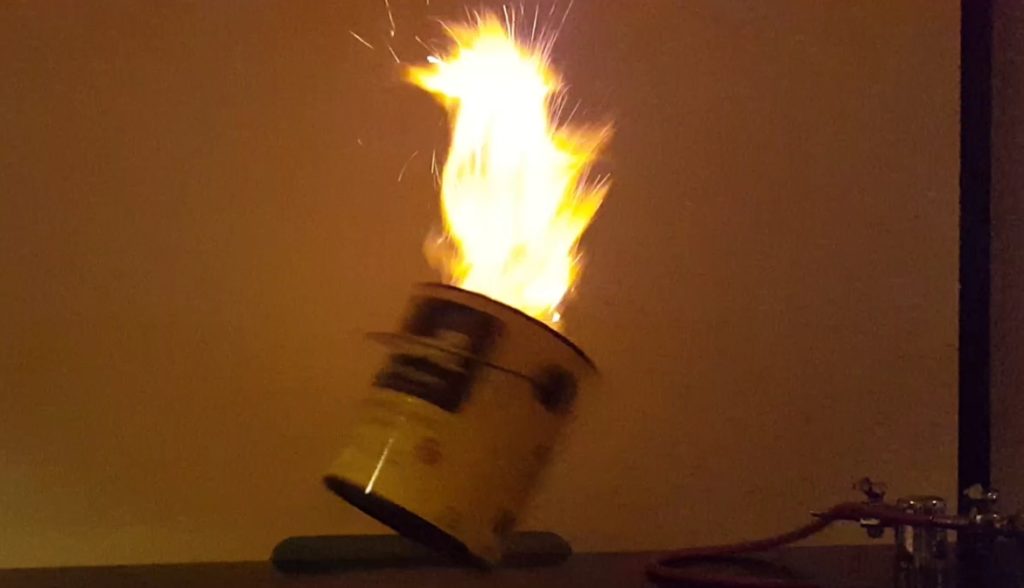 As I have mentioned before, I am teaching a thermodynamics class at Anderson University. The first few lectures were mostly composed of review. It is important to do such a review, because some concepts are so critically important that I must be sure the students remember them and understand them well. Whenever possible, I like to do demonstrations to help the students visualize the concepts I am trying to get them to understand.

One of my very favorite demonstrations involves something surprising that happens when you burn natural gas in just the right way. It can be used to illustrate several different things, but I used it in my thermodynamics class to illustrate the concept of power. I hope you enjoy it:

I have been pretty busy with the thermodynamics class that I have been teaching at Anderson University, as well as finishing up the last book in my elementary science series. As a result, I haven’t had a lot of time to write blog posts. However, I did want to share a very interesting article that I recently saw in Christianity Today. It is about another atheist who became a Christian. Her name is Nichole Cliffe. She is a journalist who grew up in Canada and went to Harvard University. She has written for different websites, including Slate, The Hairpin and The Toast, a website she co-founded.

As long-time readers of this blog know, I collect these kinds of stories, because I am fascinated by the many ways that God reveals Himself to people. This one is a bit different from the others that you will find here, however, because it has little to do with science or philosophy. Indeed, the author has no regard for apologetics. She says that coming to Christ involved figuring out what she already knew. It’s an interesting viewpoint, and I encourage you to read what she has to say:

Nicole Cliffe: How God Messed Up My Happy Atheist Life