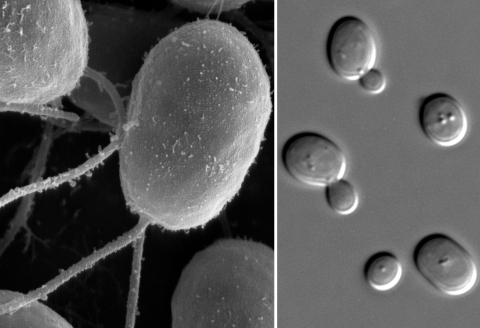 The alga (left) and yeast (right) are free-living, but when put in a situation where they must cooperate in order to survive, they do. (electron microscope images in the public domain)

Anyone who has been reading this blog for a while knows that I am fascinated with mutualism – the phenomenon whereby organisms of different species live together in a mutually-beneficial way (see here, here, here, here, and here, for example). I think it is probably a glimpse of what nature was like before the Fall. Based on what I see in mutualism, I think that lots of species were designed to cooperate with one another, and many of the pathological relationships we see today are corrupted versions of previously-beneficial ones.

Evolutionists have a different view, of course. The generally-accepted view is that mutualism starts out with one species trying to exploit another species. Here, for example, is how the text Symbiosis: An Introduction to Biological Associations, Second Edition puts it:1

Indeed, it is difficult to conceive of two organisms starting out in a mutualistic association. Most mutualistic symbioses probably began as parasitic ones, with one organism attempting to exploit another one.

To be fair, the authors of this text do allow for another option. There are some relationships between organisms that seem neither harmful nor beneficial. Barnacles that live on whales, for example, seem to neither harm nor help the whales in most cases. These kinds of relationships are called commensal, and the authors allow for mutualism to start out as a commensal relationship and then evolve into a mutualistic one.

The key, however, is the first sentence in the quote. They say it is difficult to conceive of two organisms starting out in a mutualistic relationship. Why? Because evolutionists cannot allow for a grand design in nature. They can’t look at the relationships in an ecosystem and see how they fit together in an overall plan. Instead, they have to imagine some scenario in which relationships are cobbled together by selfish organisms that are only concerned with their own survival. If organisms live in a mutually-beneficial relationship today, it is only because they evolved together (in a process called coevolution) from a negative relationship or at least a relationship that didn’t begin as a mutually-beneficial one.

A new study indicates that at least in some cases, this evolutionary-inspired idea is wrong.

Erik Hom and Andrew Murray decided to see if two different species that have no history of a relationship can produce a mutualistic relationship without any coevolution. They started with the organisms pictured above: an alga (Chlamydomonas reinhardtii) and a yeast (Saccharomyces cerevisiae). Both of these organisms are free-living, and they are not known to have any relationship in nature. The yeast uses glucose as a food source, and it uses ammonia as a source of nitrogen (an important element for all living organisms). The alga uses carbon dioxide (a byproduct of the yeast’s metabolism) and sunlight to produce its own food, and it uses nitrite as a source of nitrogen. One of the byproducts it makes is ammonia.

So…the authors put the alga and yeast together in an artificial environment that contained glucose as the only food source and nitrite as the only nitrogen source. Neither of the organisms could survive on its own in such an environment. The yeast could eat the glucose, but it couldn’t get any nitrogen, because it can’t use nitrite. As a result, it would not survive. The alga could get all the nitrogen it wanted, but it couldn’t absorb glucose. Without any carbon dioxide, then, it would die. However, when the two species were put together in that environment, they immediately worked together. The yeast made carbon dioxide when it metabolized its food, which the alga used to make its own food. The alga used nitrite and then made ammonia, which the yeast used as a source of nitrogen. As a result, the two organisms survived in a mutually-beneficial relationship.2

Now at first glance, this might not be surprising. After all, the yeast always makes carbon dioxide as a part of its life cycle. In the same way, the alga always makes ammonia as a part of its life cycle. Thus, there isn’t any need for a relationship. They are each just using the others’ waste, right? Wrong! The authors of the study found that the two populations were able to survive even when the concentrations of nitrite and glucose were changed independently by more than a factor of 100. This indicates an ability for the two populations to interact and recognize the other’s needs. In addition, they noticed that the alga’s cell wall changed from its free-living form, indicating that at least the alga purposely adapted to a relationship with the yeast.

The authors note that they tested several other species and found that three species from the same algal genus will form mutualistic relationships with many different fungi that are similar to the yeast they tested. As they state:

The ease with which fungal-algal mutualisms were created suggests that ecological interactions may be relatively easy to establish. Furthermore, they do not require a prior facultative, commensal, or parasitic stage, or coevolutionary adaptation.

This is not surprising at all from a creationist standpoint. However, it does go against the generally-accepted evolutionary explanation of mutualism.