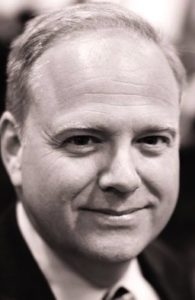 Robert Tracinski, who writes about politics and culture
(click for source)

We live in an age of shocking scientific illiteracy, and to add insult to injury, some of the loudest “cheerleaders” for science are some of the most ignorant when it comes to science. No one illustrates this better than Bill Nye, who is considered by many scientifically illiterate people to be today’s spokesperson for science, despite the fact that he is woefully ignorant about the science upon which he pontificates (see here, here, here, here, here, and here).

As a result, it is refreshing to run across the work of someone who is not even trained as a scientist but can write about science realistically. I was recently sent an article by one such person: Robert Tracinski. He has a degree in philosophy, but has spent more than 20 years writing about politics and culture. Nevertheless, the piece I read was about science, and it has some very important words for the scientifically illiterate among us. The title of the piece is Why I Don’t “Believe” in “Science”, and while the title might surprise you, I strongly recommend that you read it in its entirety. As a trained scientist who does original research in my field, I can tell you that it is one of the best commentaries on science I have seen from a layperson.

Is it surprising that I am recommending a piece from someone who doesn’t “believe in” science? It shouldn’t be. As he writes in the piece:

The problem is the word “belief.” Science isn’t about “belief.” It’s about facts, evidence, theories, experiments. You don’t say, “I believe in thermodynamics.” You understand its laws and the evidence for them, or you don’t. “Belief” doesn’t really enter into it.

I couldn’t agree more. The problem, of course, is that some of the people claiming that they “believe” in science the loudest don’t understand the least bit about it. They think “belief in science” means accepting the scientific consensus on any issue. That, of course, is the opposite of science. As Tracinski writes:

Some people may use “I believe in science” as vague shorthand for confidence in the ability of the scientific method to achieve valid results, or maybe for the view that the universe is governed by natural laws which are discoverable through observation and reasoning.

But the way most people use it today — especially in a political context — is pretty much the opposite. They use it as a way of declaring belief in a proposition which is outside their knowledge and which they do not understand.

There are a lot of people these days who like things that sound science-y, but have little patience for actual science.

I couldn’t agree more. If you want to use science as a means by which to understand what is going on in the world, you are in for some hard work. It doesn’t mean just parroting what the High Priests of Science proclaim. It means studying the evidence related to the issue, educating yourself about how different groups of scientists interpret that issue, and then deciding for yourself what position is backed by the most evidence. It also means being willing to change your mind if you learn additional evidence that contradicts your original position.

Your “belief” is quite irrelevant, as is the dogma promulgated by the High Priests of Science. Only the evidence is relevant, and if you aren’t willing to investigate that evidence, you are not using science.