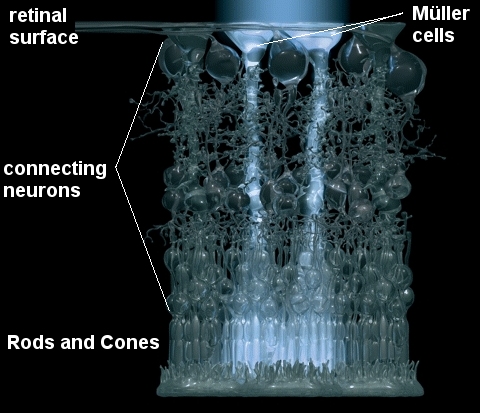 A model of the vertebrate retina, showing the Müller cells (image by Dr. Jens Grosche, Universität Leipzig, found in reference 2)

Nature is filled with amazing designs, which leads me to the conclusion that it is the product of a Magnificent Designer. Of course, many scientists disagree with that conclusion, and some of them try to argue against it by pointing out examples of what they think are bad designs in nature. One of the oft-cited examples is the retina of the human eye. As Dr. Michael Shermer puts it:1

The anatomy of the human eye shows that it is anything but “intelligently designed.” It is built upside down and backwards, with photons of light having to travel through the cornea, lens, aqueous fluid, blood vessels, ganglion cells, amacrine cells, horizontal cells, and biploar cells, before reaching the light-sensitive rods and cones that will transform the signal into neural impulses.

To understand what he is saying, look at the illustration above. When light hits the surface of the eye’s retina, it has to travel through layers of cells that essentially connect the retina to the rest of the nervous system. Only then can it reach the light-sensitive cells, called rods and cones, and be converted into a signal that can be sent to the brain. This, of course, seems backwards to most evolutionists. According to them, if the retina were designed intelligently, the rods and cones would be at the retinal surface so they are the first thing the light hits. That way, the connecting neurons could be placed behind the rods and cones so they don’t interfere with the light in any way.

Like most arguments inspired by evolution, the more we learned about the human retina, the less reasonable this argument became. Back in 2007, a study published in the Proceedings of the National Academy of Sciences of the USA showed that light doesn’t have to travel through the connecting neurons to reach the rods and cones. Instead, as shown in the illustration above (which appeared on the cover of the journal), there are special cells, called Müller cells, that collect the light and guide it to the rods and cones.2

The retina is revealed as an optimal structure designed for improving the sharpness of images.

The authors of the analysis showed that the position of the rods and cones in the retina combined with the way the Müller cells guide the light to them make them much less sensitive to light that is scattered within the eye itself. This, in essence, reduces the “noise” that the rods and cones would get from errant photons, making the overall image sharper and clearer.

I blogged about this previously, pointing out that it is precisely what creationists predicted and quite opposite what evolutionists maintained. I am bringing it up now because further research has confirmed the creationist prediction in an even more stunning way!

The same scientists who published the 2010 study teamed up with two other scientists and continued to analyze the exquisite design of the retina. To understand the results of their new study, you first have to understand the difference between rods and cones. Both types of cells detect light, but the rods simply detect the presence or absence of light. The cones, on the other hand, detect color. Because they detect color, however, the cones aren’t as sensitive to light. In poorly-lit situations, then, your sense of sight depends strongly on the rods, and you don’t get a good sense of color. In well-lit conditions, the cones become more important, giving you excellent color vision as well.

Well, it turns out that the Müller cells in the eye are exquisitely-designed to deal with this trade-off. As the authors of the new study state:4

…Müller cells separate white light according to its wavelengths; medium- and long-wavelength light is concentrated onto cones and short-wavelength light leaks to illuminate nearby rods. Next, we show similar theoretical calculations for the guinea pig Müller cells and describe imaging experiments in the isolated guinea pig retina, to find remarkable agreement between the experimental results and the computational model. These findings are consistent with the hypothesis that the wave guiding properties of Müller cells are wavelength-dependent in a manner that improves cone-mediated vision while minimally impeding rod-mediated vision. (emphasis mine)

In other words, the Müller cells direct the light to where it needs to go so that humans (and guinea pigs and probably all vertebrates) have the best daytime vision possible without significantly impeding their night vision.

Now please understand that none of this would be possible if the rods and cones were placed on the retinal surface, which is what evolutionists have consistently argued would be the best design. Had the Creator designed our eyes the way evolutionists thought they should be designed, not only would our vision be more blurry (as shown in reference 3), but we would also have poorer night vision, poorer day vision, or perhaps both!

The next time you hear someone pontificating about “bad designs” in nature, remember the design of the retina. Evolutionists were convinced it was a bad design, but modern science shows us that it is, in fact, an exquisite design. The more we study nature, the more it testifies to its Creator.