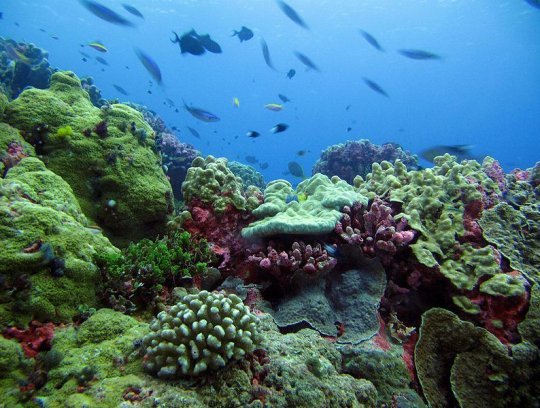 A coral reef in the Phoenix Islands Protected Area, near Coral Castles (click for credit)

I do a lot of scuba diving, and I love coral reefs. They are probably the most beautiful things you can see under water, and they are usually teeming with fish and other wildlife. While there are other wonderful things to see in the ocean, I can’t think of anything better than nearly depleting a tank of air while slowly swimming over and around a coral reef.

However, there are times when coral reefs aren’t so beautiful. Compare the picture above, for example, to the following picture: 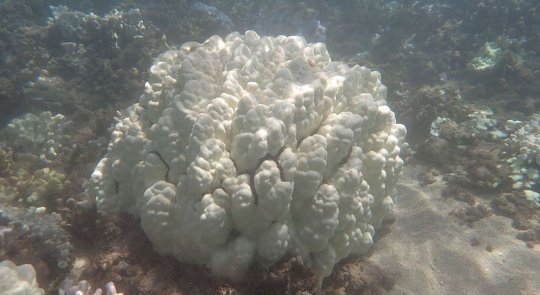 What’s the difference? The coral pictured above has bleached.

Why do corals bleach? The honest truth is that we don’t know. While you often hear that bleaching is caused by the water becoming too warm, it can also happen when the water becomes too cold. Pollution can also cause it. Thus, the most accurate thing to say right now is that corals tend to bleach when they are “stressed.”

Why am I writing about corals and bleaching? Because I ran across a story in the New York Times about a coral reef called Coral Castles, which is located in the Phoenix Islands Protected Area.

In 2003, the waters of Coral Castles got very warm, and a large portion of the corals bleached. Even though corals do not die when they bleach, the article says that researchers had declared the reef “dead.” Why? Because when they bleach, corals are not as well-equipped to perform the basic tasks necessary to stay alive, so they are more likely to die when they bleach than when they have their zooxanthellae. I assume that if researchers really did declare the reef dead (I couldn’t find anything from 2003 that indicated this), it was because they thought that with so many corals at such a disadvantage, there was no way the reef could recover.

However, it most certainly did recover. The article reports on the observations of a research team that recently went to examine the area:

This month, the Massachusetts-based research team finished a new exploration of the reefs in the secluded Phoenix Islands, a tiny Pacific archipelago, and were thrilled by what they saw. When they splashed out of an inflatable dinghy to examine Coral Castles closely, they were greeted with a vista of bright greens and purples — unmistakable signs of life.

“Everything looked just magnificent,” said Jan Witting, the expedition’s chief scientist and a researcher at Sea Education Association, based in Woods Hole, Mass.

But there’s more to it than that. This recovery brings up the question, “Why do corals bleach in the first place?” As I noted earlier, when corals are “stressed,” they bleach. However, that doesn’t really answer the question, does it? What is it about being “stressed” that causes them to expel their zooxanthellae?

I have no answer to that question, but I did run across an interesting hypothesis put forth by Jim Steele, the director emeritus of the Sierra Nevada Field Campus at San Francisco State University. He claims that corals expel their zooxanthellae as an adaptation mechanism. He thinks they are expelling one species of zooxanthellae to get a different species. Presumably, this is because the different species will perform better for the coral in the long run.

I have no idea whether or not there is any merit to Steele’s hypothesis. I just haven’t studied coral/zooxanthellae mutualism enough to evaluate it. If any of you know enough to critique it, I would love to read your thoughts.