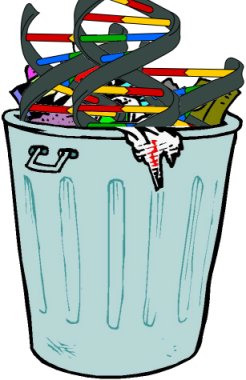 As important functions are found for more and more junk DNA, some evolutionists are trying to claim it is not all that important to evolution.

Once Susumu Ohno coined the term “junk DNA” and called it the remains of extinct genes1, junk DNA started to become the darling of the evolutionary community. First, it was seen as an effective argument against creationism or intelligent design. After all, why would the Creator put so much useless DNA into His creation? More importantly, however, it was considered an integral component of evolution. After all, evolution requires that genetic mutations acted on by natural selection produced genes with novel functions. However, it is difficult to expect that to work when the mutations occur in genes that the organism needs. Thus, one of the major mechanisms of genetic evolution involves gene duplication. In this view, a gene is duplicated, and one copy continues to produce the protein it always produced, while the other is free to mutate wildly. Waving the magic wand of time, the evolutionist then says that a large number of these mutating copies will become useless junk, but a small number of them will develop into novel genes. As you can see, then, junk DNA is integral to evolution, and according to evolution, most organisms should have a lot of it.

This, of course, is why Dr. Jerry Coyne says the following in his book, Why Evolution Is True:2,

When a trait is no longer used, or becomes reduced, the genes that make it don’t instantly disappear from the genome: evolution stops their action by inactivating them, not snipping them out of the DNA. From this we can make a prediction. We expect to find, in the genomes of many species, silenced, or ‘dead,’ genes: genes that once were useful but are no longer intact or expressed. In other words, there should be vestigial genes…Our genome—and that of other species—are truly well populated graveyards of dead genes.

Unfortunately for evolutionists, function is routinely being found for this supposed “junk DNA.” As a result, some evolutionists have realized that they need to back away from the claim that junk DNA is integral to the process of evolution.

For example, Dr. Larry Moran has tried to rewrite the history of evolutionary thought. In discussing Dr. Jonathan Wells’s book The Myth of Junk DNA. He writes:

The IDiots have a bit of a problem. In order to make this book look important they have to first establish that the concept of abundant junk DNA in our genome was a “pillar” of support for evolution. That’s hard to do when their understanding of evolution is so flawed that they don’t see the difference between “Darwinism” and evolution by random genetic drift. Their claim that evolutionary theory PREDICTED the presence of huge amounts of junk DNA in our genome is just plain false. (emphasis his)

Not surprisingly, its Moran’s statement that is 100% false, and its falsehood can be demonstrated quite clearly simply by reading a recent paper written by two young-earth creationists and published in a secular, peer-reviewed scientific journal. —Sigh— Yes, both creationists and intelligent design advocates write papers about evolution that are published in the secular, peer-reviewed literature. Anyone who says otherwise spends little time reading such literature.

This particular paper was written by Chase W. Nelson and world-renowned geneticist J.C. Sanford. They examined the program Avida, which attempts to simulate evolution using “digital organisms.” In the digital world of Avida, the organisms are replicating “creatures” whose “DNA” is composed of strings of computer instructions. As these creatures replicate, mutations change those instructions. Avida has shown that over time, these mutations (acted on by a digital form of natural selection) produce creatures that can perform new logic operations, which would be the digital equivalent of new biological characteristics. In other words, Avida produces a digital simulation of evolution using strings of computer instructions as DNA and logic operations as biological traits. It is considered the gold standard when it comes to digital simulations of evolution.

The problem that Nelson and Sanford point out in their excellent paper3 is that Avida uses only high-impact mutational events – events that produce a lot of fitness very quickly. However, such high-impact mutational events are extremely rare in nature. To be more realistic, the authors conclude, Avida should use digital mutation events that are more like real-life mutational events when it comes to their effect on the fitness of the organism. When the authors do this, they find that Avida is unable to produce new logic operations. In other words, when you make the simulation more realistic, you no longer see the evolution of new traits. This, of course, is precisely what creationism predicts, but it is not all that surprising. As I have already pointed out, the longest-running experiment on evolution shows that the changes mutations can make in the genome are extremely limited.

What I found interesting was another point they make in their paper. They say that an integral part of the Avida program is…wait for it…junk DNA:

The ancestral genome devotes about 15 instructions to the essential replication code, while the remaining 85 positions are occupied by benign no-operation instructions, analogous to inert “junk DNA” that can be used as raw material for evolutionary tinkering.

Now remember, Moran claims that a large amount of junk DNA is not a pillar of support for evolution. Contrary to that assertion, the standard digital simulation of evolution starts out with a genome that is 85% junk DNA. I don’t know about Moran, but to me, a genome that is 85% junk does, indeed, represent a genome with “huge amounts” of junk DNA, and that is the beginning assumption of the standard computer simulation of evolution. As this makes clear, a vast amount of junk DNA in most creatures’ genomes is an integral component of evolutionary theory, and like most things, the more we learn about genetics, the more we realize how wrong that integral component is.