NOTE: If you happened onto this link first, it was a preliminary review based on only three modules. The full review is now available. 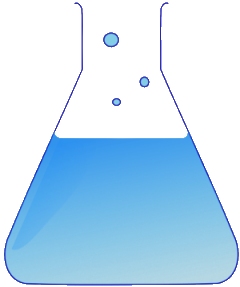 An Erlenmeyer flask is a typical piece of glassware used in chemistry experiments. (click for credit)

I write this blog post with a somewhat heavy heart. Apologia is in the process of producing Exploring Creation with Chemistry, Third Edition, which is an update of the high school chemistry course I wrote. Updating science books is a good thing, and when Apologia updated the Human Anatomy and Physiology course that I co-authored, I was very happy with the result. The new edition of that course is better than the old edition, no question about it. I wish I could say the same thing about the new edition of this chemistry course. So far, however, I cannot.

Now please understand that I haven’t seen the entire updated course yet. Although Apologia’s catalog indicated the new course would be available in July, they have delayed the release of the book. To help families who plan to use the new edition for this academic year, they have posted the first three modules of the course online. That’s what I have reviewed. There were 16 modules in the original course, and assuming this holds true for the new edition, that means I have reviewed only about 3/16 of the course.

In addition, please understand that since I wrote the original course, I am probably not as objective as I would like to be when evaluating the new edition. After all, I wrote what I thought was the best explanation of general chemistry that I could possibly give. Perhaps I can’t be satisfied with any update. However, I was very satisfied with the update of the Human Anatomy and Physiology course that I co-wrote, so I really hope I am being as objective as possible. I am certainly willing to believe that there’s a better way to teach chemistry than what I developed. I just don’t think this is it.

Finally, I have to say that I know one of the authors of the new edition personally (Rusty Hughes), and I consider him to be an excellent teacher. I also really like him as a person. I don’t want him (or the other author, who I do not know) to take offense. It’s just that many people have asked for my thoughts on this new edition, and I feel compelled to write them.

The first thing I noticed while reading the new edition is that they changed the order of topics discussed. That’s no big deal. There isn’t any “magic” order in which to teach chemistry. The authors of this new edition are taking the “atoms first” approach, where they teach students about atoms and their structure before discussing the chemistry that atoms do. That’s a valid approach. Indeed, it is the approach taken by the textbook I am using in the college chemistry course I am currently teaching. So the change in order doesn’t bother me at all.

The second thing I noticed was that they seem to be trying to cram more information into this new edition. Module 1, for example, deals with measurements and units, which is common in most chemistry books. In the original version of the course, that’s the only thing covered in Module 1. In the new edition, Module 1 includes all of that plus a discussion of the scientific method. In the new edition, Module 2 covers everything that is covered in Module 3 of the original course, but it also contains what is covered in the first section of Module 4 in the old course.

Cramming more information into the course could be problematic, but I won’t know for sure until I see the course in its entirety. A typical school textbook covers more material than you would ever cover in a year, allowing the teacher to cover what he or she thinks is most important and skip the material that he or she thinks isn’t important. The problem is that most homeschooling parents don’t have any idea what to cover and what to skip, because they don’t know the subject very well. Thus, it is best for a book focused on homeschoolers to cover just what one needs to cover in a year. The coverage of the original book already provides students with excellent preparation for college chemistry, so adding a lot more material could result in a course that asks the students to do more than the typical, college-bound high school student can accomplish in a year.

The third thing I noticed was an attempt to “dress up” the book with extraneous Christian content. This is common in many textbooks designed for Christian schools, but I tried to avoid it as much as possible in the books I wrote. In the original chemistry course, there are times when I highlight the amazing design of chemical systems as evidence of God’s handiwork. I also discuss Bible verses that are relevant to the topic being covered, such as talking about Genesis 9:11-17 when I cover rainbows. However, I try to do such things only when they relate directly to the topic at hand. In this new book, they tend to add Christian content when the relationship between the content and the topic at hand is tenuous at best.

For example, Module 3 in the new edition discusses atomic structure. As part of that, the students are taught the wavelike characteristics of light: frequency, wavelength, amplitude, and speed. The authors then add a discussion of Edward William Morley, an important chemist. They discuss the fact that he set a record of chemical precision that has never been bested, which is true, but it has nothing to do with light. To justify including him, the authors say:

We have included Edward Morley at this point due to his work in another area of science. He was known for helping Albert Michelson measure the speed of light. This research was a significant building block for Albert Einstein to develop his theory of relativity.

This is simply not true. Albert Michelson measured the speed of light with incredible precision in 1879 and published the result in 1880.1 This was before he started working with Morley, which was in 1882.2

Michelson and Morley teamed up to see if earth’s motion affected the speed of light. At that time, physicists thought there was a space-filling substance, called ether, that permeated the universe and was at rest. This ether was supposedly the medium through which light waves traveled. Since the earth was supposed to be moving through the ether, the earth’s motion should affect the speed of light. However, that effect was thought to be too small to be detected by actually measuring the speed of light. Instead, Michelson and Morley built a device called an “interferometer,” which split light into two beams, caused the light to travel separate paths, and then combined the light again. They looked at how the combined beams interfered with one another. Had the light beams moved at different speeds, they would produce an interference pattern.

Thus, Morley had nothing to do with measuring the speed of light. He measured the way light beams traveling along different paths interfered with one another. In the end, Michelson and Morley saw no interference. This indicated that either the ether did not exist, or it moved with the earth. Physicists weren’t willing to believe the latter conclusion, because that would indicate there is something special about the earth. Thus, they concluded that the ether didn’t exist. This conclusion, not the speed of light, is what helped Albert Einstein develop his theory of relativity.

To me, the fact that the statement is wrong isn’t as important as why I think the authors made the statement to begin with. I think the real reason the authors wanted to discuss Morley is that he was a devout Christian. The authors wanted to give a Christian quote from him, so they forced his biography into a topic for which he really has no relevance and then had to simplify his great accomplishments to the point where they were actually saying incorrect things. This is a big problem with trying to “dress up” a book with extraneous content.

As a brief aside, this same section of the book says that Michelson was an atheist. I think that is another oversimplification. The historians I have read indicate he was agnostic. John D. Barrow, for example, says:3

Morley was deeply religious. His original training had been in theology and he only turned to chemistry, a self-taught hobby, when he was unable to enter the ministry. Michelson, by contrast, was a religious agnostic.

To characterize an agnostic as an atheist is, once again, a vast oversimplification. Of course, it’s hard to know a man’s heart, so perhaps the historians I have read are wrong. Nevertheless, I would think saying something like, “Michelson was not religious” would be more consistent with what we know.

There are other examples like this, but I want to move on to another error introduced into the new edition, because it is important. In an attempt to clarify a discussion of cathode ray tubes, the authors add an illustration, Figure 3.3. They show a cathode ray tube and a magnet, and they show the cathode rays bending in the presence of the magnet. This is all true. The problem is that they label the magnet with a positive end and a negative end, and they describe the figure as follows:

This diagram shows the path cathode rays take in the presence of a magnet. Notice how they bend toward the positive plate of the magnet.

There are other problems with this new edition, but they are minor compared to the ones I have discussed.

So what’s the bottom line? Right now, I can’t say for sure. Based on these three modules, I don’t think this edition is an improvement over the old one. I think it will be harder for homeschoolers to use, and it definitely contains some errors. Now, of course, I could be wrong about the first part of that statement. Perhaps homeschoolers will find this book easier to use. As far as the errors go, they can be corrected. Thus, I don’t yet know whether or not this book is a large enough step backwards to make me write a new high school chemistry course for homeschoolers.

For that, I need to wait to hear from the real experts: homeschoolers who try to use the new edition. If you end up using it, I would love to hear your thoughts. You can contact me through my website.

1. Albert A. Michelson, “Experimental determination of the velocity of light made at the U.S. Naval Academy, Annapolis,” Astronomical Papers, 1:109-145, 1880.
Return to Text

3. John D. Barrow, The Book of Nothing: Vacuums, Voids, and the Latest Ideas About the Origins of the Universe. Random House Digital 2002, p. 136
Return to Text