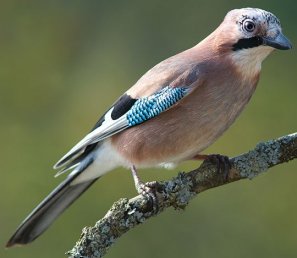 Eurasian Jays like this one are monogamous, and the male gets his mate by offering her food (click for credit).

An old proverb says, “The way to a man’s heart is through his stomach.” Some birds, like Eurasian Jays (Garrulus glandarius), have their own take on that proverb. These birds are monogamous,1 and they have an elaborate courtship ritual. Part of that ritual involves the male offering food to the female. For these birds, then, the way to the female’s heart is through her stomach. Obviously, the male wants to offer the female something appealing, but how does he know what she wants?

It has been generally assumed that the male simply offers the female food that he likes. After all, the ability to consider another individual’s feelings is rather advanced. There is some evidence that great apes are able to consider the feelings of human beings,2 but in general, it has been thought that most animals don’t have the intellectual ability to realize that a different individual might have different feelings or preferences. A recent experiment involving Eurasian Jays indicates that might not be correct.

In the experiment, a male was separated from a female by a wire fence. The male could watch the female as she ate large meals of either moth larvae or mealworm larvae. The male was then given a single mealworm larva and a single moth larva. Consistently, the male would pick up the food that was not in the female’s meal and offer it to her through the wire fence. The researchers concluded that this was because the male realized the female would be tired of what she had eaten in her large meal, and therefore the other food would be more appealing to her. This, of course, would mean that the male realized the female might have a different preference than he did, and he took that into account when deciding what to offer her.3

If that had been the end of the experiment, it wouldn’t be nearly as impressive. After all, animals are very perceptive. It’s possible that the female was doing something the experimenters didn’t notice in order to communicate her preference to the male. To rule out this possibility, they repeated the experiment, but this time, they hid the meals from the male. In this version of the experiment, the male often gave the female the same food she had just eaten. This means the female probably wasn’t giving the male any cues. Instead, the male seemed to be thinking about the female’s needs. When he saw that she had plenty of one food, he consistently offered her the other. When he didn’t see what she was eating, he didn’t have any preference in terms of which food he offered her. The authors write:

So it seems that at least when it comes to male Eurasian Jays, some animals are intellectually advanced enough to realize that another individual’s desires might be different from his own. That doesn’t really surprise me. Unfortunately, the hypothesis of evolution has conditioned us to think that some animals are “dumb,” because they aren’t as “highly evolved” as other animals. However, that’s not how a creationist should think. A creationist should realize that God created each kind of animal with all the physical and intellectual attributes it needs in order to thrive. Since animals interact with all sorts of other animals (and people), it makes sense that they would have been designed with the ability to recognize the desires of others. I suspect that as more research is done, scientists will find this ability in many other animals.