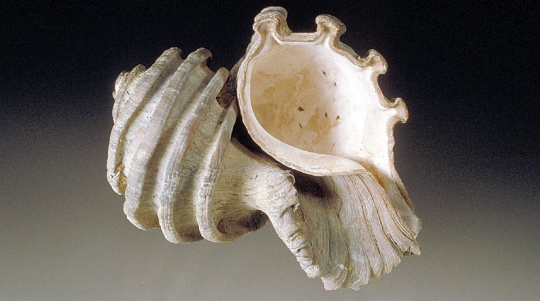 This is a picture of an Ecphora fossil. (click for credit)

Recently, I ran across a very interesting study that adds to the list of surprises for those who think that some fossils are millions of years old. The authors were analyzing the fossilized shells of an extinct group of marine mollusks from the genus Ecphora. Unlike many mollusk groups, the fossilized shells of the Ecphora are colored reddish-brown. The authors decided to find out what produces this colorization, so they soaked the fossils in weak acid to remove the minerals. What remained were thin sheets of organic residue that had all the characteristics one would expect if they were made of proteins.

When the authors examined the sheets chemically, they found all the hallmarks of proteins. For example, they put the sheets through hydrolysis, a process that living organisms use to break proteins down into their component chemicals, which are amino acids. When the sheets were hydrolyzed, they broke down into amino acids, exactly as you would expect a sheet of proteins to do. They also measured the percent carbon in the sheets as well as the ratio of carbon to nitrogen. In the end, they concluded:1

…the organic matter elemental and isotopic compositions are very similar to those from modern marine invertebrates. We conclude, therefore, that essentially intact shell-binding proteins have been preserved for up to 18 Ma.

This is significant, because even at temperatures of zero degrees Celsius, the hardiest proteins are not expected to be detectable in organic samples that are more than about 3 million years old.2 Nevertheless, the authors found lots of essentially intact proteins in fossils that are supposed to be up to 18 million years old!

This isn’t the first time researchers have claimed to find protein in supposedly ancient fossils. About two years ago, Robert R. Reisz and his colleagues were examining fossilized dinosaur eggs that are supposed to be about 190-200 million years old.3 They found organic residue that they thought was made of protein. However, they didn’t do nearly as detailed an analysis, so they couldn’t really say how intact the protein was. In addition, they interpreted it to be collagen, and that’s a pretty hardy protein. Dr. Rana from Reasons to believe, for example, thinks that collagen is durable enough for fragments of it to survive for millions of years.

In this current study of Ecphora fossils, however, the researchers didn’t find fragments. They found essentially intact proteins. Also, these shell-binding proteins shouldn’t be as durable as collagen, because they don’t have the same triple-helix structure. It seems to me that if you want to believe these fossils are millions of years old, you need to come up with some mechanism by which proteins can stay intact for so long.

Now I do have to point out two things. First, there was probably some decay in the proteins of these fossils, because the chemical analysis indicated that they didn’t have as much nitrogen in them as they should have. I would suspect that means some of the proteins had decayed, but others had not. Second, most fossilized mollusk shells are chalky white, which probably means they don’t contain any intact proteins. As a result, it is reasonable to conclude that there is something about Ecphora shells that helps them preserve their proteins. I hope more analysis eventually finds the process by which such preservation takes place, because that would help us get a better handle on the upper age limit of such fossils.