This past weekend, I spoke at the 2015 Midwest Homeschool Convention. I gave a total of six talks. Four of them were solo talks: Creation versus Evolution: Religion versus Science or Religion versus Religion?, What I Learned by Homechooling, Reasonable Faith: The Scientific Case for Christianity, and College and Faith: What’s The Real Story? I also gave two talks with Diana Waring: Homeschooling: Things We Wish We Had Known and Dealing with Pressure: The Benefits of Slowing Down. The conference was very well attended and ran quite smoothly.

I did learn one sad thing, however. Diana Waring announced that she is retiring from the homeschooling conference circuit. She will still be writing, but she will not be speaking at homeschool conventions on a regular basis anymore. The homeschooling community will be missing out on some real blessings as a result. If homeschoolers want to continue to benefit from her wisdom, they should follow her blog.

I didn’t have the chance to speak to as many people as I usually do at such conventions, because I am currently performing in a musical called The Fantasticks. As a result, I had to drive a bit more than two hours from Anderson, Indiana to Cincinnati, Ohio every morning to speak at the convention, and then I had to leave the convention early so I could drive back to Anderson, Indiana to perform in the play. Normally, I wouldn’t consider doing such a crazy thing, but this is my all-time favorite play. I have performed the roles of El Gallo (my all-time favorite role) and Henry (a washed-up actor), and in this version of the play, I got a chance to perform a different role, Amos Babcock Bellomy (a nerdy father). The role was played by Joel Grey in the movie, and I simply couldn’t pass up the opportunity. Here is a picture of me during one of the performances (I am the one in the bow tie): 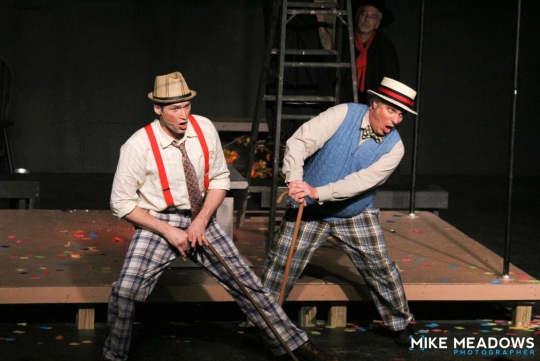 Despite the fact that I didn’t get a chance to speak to as many people as I usually do, I still had several great conversations with parents and students. One homeschool graduate (whose wife is homeschooling their children) came up to me and told me that he used my high school science courses, went to university, went to graduate school, got a PhD in biochemistry, and is now doing research at a major biotechnology firm. His research group already has three patents and is just about to submit the necessary information for a fourth. He appreciated the creationist viewpoint in all my textbooks and is a creationist himself. This is just another example of how wrong Bill Nye is when he claims that students who are taught creationism “… will never feel the joy of discovery that science brings.”

I also got a chance to answer some very good questions at my talks and during what little free time I had at the convention. I got one very interesting question while I was walking back from one of my talks to my publisher’s booth. It came from a student who reads this blog from time to time. He characterized himself as a “theater nerd,” and he knows that I have written several original plays. He noticed that all the plays posted here have Christian messages. He asked if I had ever written a play that doesn’t have a Christian message. I thought about it, and to the best of my recollection, I haven’t. He then asked why I perform in plays that don’t have a Christian message when all the plays I write are focused on a Christian message.

That’s an excellent question, and I had to think about my answer. In the end, I think that the only reason we as human beings can appreciate art is because we have been made in the image of God (Genesis 1:26). As a result, art interacts with our spiritual nature. At the same time, however, we experience art in different ways. One way we can experience art is to simply enjoy it. I enjoy a lot of art, and much of it has no relation to Christianity at all. Nevertheless, it is still spiritual, because it uplifts my soul.

Performing a role in a play is, for me, another way of enjoying art. Many actors think they are creating art when they perform a role, and I wouldn’t argue with them. For me, however, I don’t think I am creating anything when I perform a role. Instead, I am interpreting art that has already been created. As far as I am concerned, that’s a lot like looking at a painting and interpreting the artist’s message. Because I have been made in the image of God, I enjoy a lot of art, regardless of whether or not it has a Christian message. As a result, I enjoy performing in plays, regardless of whether or not they have a Christian message.

Creating a work of art is another way of experiencing art, but it is quite different from enjoying art. In order to create something, it must come from deep within your soul. For me, Christianity is at the core of my being, so it is only natural for the art that I create to have a Christian message. Of course, calling my Christian dramas “art” might be a bit pretentious, but that’s the way I see them. Even when it comes to the science textbooks I write (and I know many students would would not consider them “art” in any sense of the word), they have a Christian message for the same reason. I always found it difficult to leave out the Christian message in the articles I wrote for the mainstream, peer-reviewed scientific literature, and I love the fact that I don’t have to do that for the science texts I write!