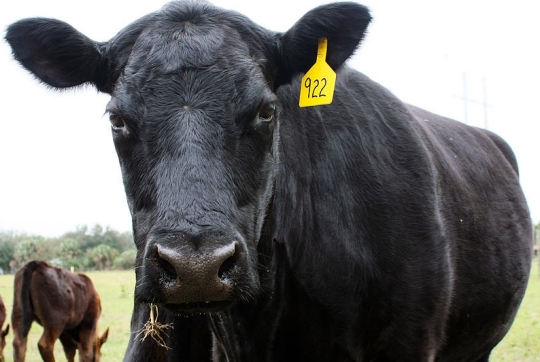 This Black Angus cow is not happy about a study done by Carnegie Mellon University!
(click for credit)

Consider, for example, this story from The Guardian. The headline says it all:

The article’s main discussion point is a report issued by a thinktank known as Chatham House, but it discusses several sources in which scientists and policymakers insist that we must reduce our meat intake in order to curb global warming. Why? It seems simple enough. Keeping livestock requires energy, and the livestock themselves produce greenhouse gases such as carbon dioxide and methane. It only makes sense that eating food coming from plants (which consume carbon dioxide and produce little methane) would reduce greenhouse gas emissions, right?

Well, a study done by Carnegie Mellon University concludes precisely the opposite!

The results of the first scenario aren’t very surprising. If we ate fewer calories, all three things they considered (energy use, greenhouse gas emissions, and blue water footprint) would decrease. This, presumably, would be good for both people and the environment. The other two results, however, are surprising, at least if you look at nature in a simplistic way. If we all continued to eat the same number of calories but switched to a healthier diet (which means less meat and dairy, more fruits and vegetables), energy use would increase by 43%, blue water footprint would increase by 16%, and greenhouse gas emissions would increase by 11%.1

So just shifting to a diet that is richer in fruits and veggies doesn’t help us reduce our supposed impact on climate. In fact, it makes our impact worse. But what if we did both? Would the reduction of calories offset the problems produced by switching to a diet richer in fruits and veggies? The answer is no. If we did both, we would still increase our energy use by 38%, blue water footprint by 10%, and greenhouse gas emissions by 6%. According to this study, then, if we truly want to reduce our impact on climate change, we need to increase our consumption of meat and dairy!

How did the policymakers and scientists discussed in The Guardian article I linked to previously get it so wrong? Because they looked at nature too simplistically. Yes, animal products do have a lot of energy and greenhouse gas emissions related to them, but then again, they require a lot less dedicated farmland. This reduces the energy needed to maintain them. It also makes more land available for year-round plant habitation, which should consume greenhouse gases.

In addition, meat and dairy products contain a lot of fat, and from a Calorie standpoint, fat is a very efficient delivery system. Each gram of proteins and carbohydrates (the main sources of energy in fruits and vegetables) contains only about 4 Calories per gram. However, fat contains about 9 Calories per gram. So when it comes to Calories, you eat less than half as much fat as you do proteins and carbohydrates. Thus, you eat less food on a diet that is rich in meat and dairy. I am sure there are many other factors that are important, but those are the two I can think of right off the top of my head.

Now please understand that I am not saying this study is definitive. It has to make assumptions, and it has to ignore certain processes in order to make the study manageable. If you make different assumptions and ignore different processes, you can come to the opposite conclusion, as one study has done.2 My point is that most policymakers and scientists arrived at their conclusions regarding global warming and food consumption by looking at things in an overly simplistic way. When you actually study the problem in a less simplistic way, you can come to a different conclusion.

Of course, if you think the earth was thrown together by random interactions governed by the laws of physics, you are prone to look at it as a simple system. As someone who thinks the earth has been marvelously designed, however, I expect it (and the processes that govern its life) to be much more complex. That, of course, is what serious science tells us.