Wallace Smith Broecker, known to friends and colleagues as “Wally Broecker,” has an earned PhD in geology from Columbia University. He is a professor in Columbia’s Earth and Environmental Sciences department and has published more than 450 journal articles in various earth science disciplines. He also has 10 books to his credit, including Fixing Climate: What Past Climate Changes Reveal About the Current Threat–and How to Counter It.

While Dr. Broecker’s list of academic accomplishments is very impressive, he is best known among earth and atmospheric scientists as the man who coined the phrase “Global Warming.” In 1975, he authored a paper entitled, “Climatic Change: Are We on the Brink of a Pronounced Global Warming?” 1 In that paper, he predicted how temperatures would rise due to increased carbon dioxide emissions.

Interestingly enough, he doesn’t like being called the “father of global warming.” In a recent interview in the journal Science, he says he offered a $200 reward to anyone in his class who could find an earlier reference to “global warming” so that someone else can be given that title. Unfortunately for him, no one could find an earlier reference.2

What I found fascinating about the interview, however, was his admission that the data really don’t support the idea that “global warming” will be a catastrophe.

In response to the question, “What’s the most misunderstood thing about climate change?”, Dr. Broecker said this:

I always tell people that if all we had was a natural record, we would be in a weak position with regard to saying we should do something about carbon dioxide. But our position is really based on physics, which says if you add greenhouse gases to the planet, it’s going to warm…If it doesn’t happen, that would mean that we’re in the dark ages as far as understanding climate.

So the “father of global warming” admits that the natural record (the data) really doesn’t show that increasing carbon dioxide leads to increased global temperatures. Indeed, that is certainly the case. If you look at the most accurate measurements of global temperature since 1978, you see no significant trend in the data:3 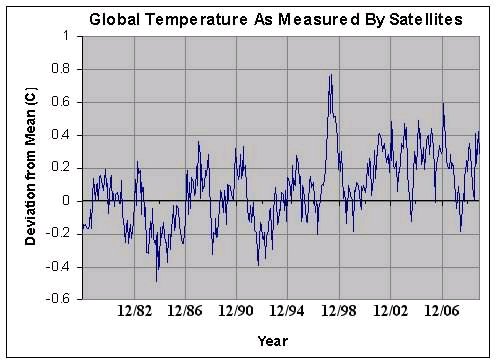 Satellite Measurements of Global Temperature since 1978

So why does the father of global warming believe that global warming is such a serious threat to our well-being? He says that physics tells us it is. The problem is that physics does not tell us that. Physics tells us that if we increase the amount of carbon dioxide in a container, the container will warm in the presence of sunlight, and the more carbon dioxide that is added to the container, the warmer it will become.

The only thing physics tells us is that more carbon dioxide means more heat trapped in the atmosphere. If nothing else happened as a result, then of course global temperatures would increase. However, we know that there are negative feedback mechanisms associated with climate, and that is borne out by the fact that satellites see no significant warming trend despite thirty years of increasing carbon dioxide levels.

In the end, then, the father of global warming is telling us to ignore the data and concentrate on speculations that are based on an incredibly naive view of atmospheric physics. Sorry – I prefer to make decisions based on the data, not naive speculations!

2 Responses to Speculation Above Data – Standard Fare for “Global Warming”