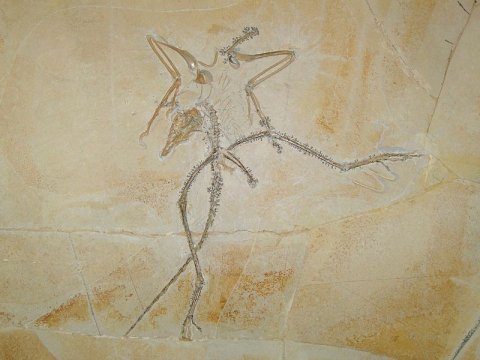 This Archaeopteryx fossil, known as the "Thermopolis specimen," was analyzed chemically. The results were surprising to those who think it is millions of years old (click for credit)

Archaeopteryx is an extinct bird that we know only from the fossils it left behind. There are eleven discovered fossils in existence, and the one that is generally considered the most well-preserved is called the “Thermopolis specimen.” It was found somewhere in the Solnhofen region of Germany and was part of a private collection until it was acquired by the Wyoming Dinosaur Center in Thermopolis, Wyoming.1 The Solnhofen Limestone formation, where it was probably preserved, is thought to be 150 million years old.2 Because the specimen is so well-preserved, geochemist Roy Wogelius and his colleagues wanted to analyze the specimen chemically, to see if there were any chemical remnants of the actual bird still in the fossil.

How do you chemically analyze a fossil without destroying it? One way is to use the Stanford Synchrotron Radiation Lightsource (SSRL). This instrument produces high-intensity X-rays which are used to illuminate the material being studied. The elements in the material absorb these X-rays, becoming “excited” with the extra energy. In order to “de-excite,” they release that energy with X-rays of their own. The released X-rays are different for each element, so when you analyze the X-rays being emitted by the illuminated fossil, you can determine what elements exist in the fossil, along with their concentrations.

So Roy Wogelius and his colleagues teamed up with some physicists at Stanford University to analyze this incredibly well-preserved Archaeopteryx fossil. The results were surprising, at least to those who think the fossil is 150 million years old.

What does this tell us? Well, here’s what the authors say is their most striking result:

…elevated Zn levels associated with the skull and other bones have persisted over geological time and most likely, along with phosphorous and sulfur, are remnants of the original bone chemistry.

So even after a supposed 150 million years, there is still a lot of the original chemistry from the bird itself. While this is amazing, I thought the other thing they discovered was even more incredible. When they looked at the levels of phosphorus in the rachises (feather shafts) that are preserved in the limestone, they found that the levels were once again quite different from the surrounding limestone. Instead, they were very similar to the levels found in the rachises of birds that are currently alive!

This is really surprising, because it has always been thought that the feathers we see in these Archaeopteryx fossils are just impressions left behind in the surrounding limestone. However, that’s not what these results indicate. As the authors state:

Here we present chemical imaging via synchrotron rapid scanning X-ray fluorescence (SRS-XRF) of the Thermopolis Archaeopteryx, which shows that portions of the feathers are not impressions but are in fact remnant body fossil structures, maintaining elemental compositions that are completely different from the embedding geological matrix.

This kind of analysis, combined with the results of several other fossil analyses, provide strong evidence that such fossils are not millions of years old.