Skip to content
In 1932, astronomer Dr. Jan Oort was studying the motion of stars in the Milky Way and could not understand his results unless he assumed there was a lot of matter in the galaxy that he was not seeing. As a result, he proposed the existence of matter that he assumed was very real but was not detectable using the instruments available at the time. Just a year later, astrophysicist Dr. Fritz Zwicky found that he had to make the same assumption to understand the Coma galaxy cluster. Several years later, he referred to this undetectable matter as “dunkle Materie,” which is German for “dark matter.”

However, the most compelling evidence for the existence of dark matter came more than 40 years later, when astronomers started measuring the speeds at which stars orbit the center of the galaxy they are in. If you look at the photo of a spiral galaxy above, you will see that it is much brighter at its center than it is at its edges. Based on such observations, it was assumed that most of a galaxy’s mass is located at its center. If that assumption were correct, it would mean that the stars near the center of the galaxy would orbit the center faster than the stars at the edge of the galaxy, just as the planets near the sun orbit much faster than the planets far from the sun.

In 1975, Dr. Vera Rubin and Dr. Kent Ford announced at a meeting of the American Astronomical Society that their studies indicated the stars in a galaxy orbit the center at roughly the same speed, regardless of where they are in the galaxy. This was a shock, and about the only thing that could explain it was the assumption that there was a lot of mass spread throughout the galaxy that could not be detected. Dark matter, which up until that time was mostly a curiosity, soon became a staple of modern astronomy. Today, astrophysicists estimate that 83% of the matter in the universe is dark matter – stuff that we cannot (as yet) detect directly.1

Since we can’t see dark matter directly, astrophysicists have done several investigations to study it indirectly. For example, matter can act as a lens, bending light that passes near it. If astrophysicists see a strong lens effect without a lot of visible matter to bend the light, they assume that dark matter is what’s doing the bending. This has led to what some consider to be the best evidence for dark matter. Astrophysicists were studying the Bullet Cluster, which is a region thought to be where two clusters of galaxies are colliding. A NASA image of the cluster is shown below: 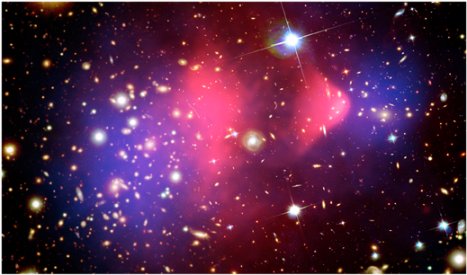 The red and pink are not a part of the photo – they are overlays that represent two different matter distributions. The pink represents the matter distribution as determined by the X-rays that are being emitted. This is thought to be a measure of the visible matter in the clusters. The blue represents the matter distribution as measured by the way light is being bent by the mass in that region. This is thought to be a good measure of the dark matter in the clusters. As you can see, the matter distributions are quite different. It is thought that this is because the collision between the galaxy clusters affected the speed of dark matter differently from the way it affected visible matter. In essence, then, the collision separated the two kinds of matter.2 While this seems reasonable, few people know that a second collision between clusters of galaxies (the Train Wreck Cluster) shows no such separation.3

So while there are some indications that we are not seeing all the matter in the universe, there are also indications that we don’t really understand what we are not seeing. The latest study muddies up the picture even more. Four astrophysicists did the largest survey of red giants (stars that are intermediate or small in mass and low in temperature) in a region of our galaxy that is two light-years wide and extends 13,000 light-years above the plane of the galaxy. They studied each red giant’s speed, and based on all the speeds they found, they estimated the distribution of mass in the galaxy. Their results indicate that their data can be explained completely by the visible matter in the galaxy. At most, their results indicate that only about one-tenth of the dark matter that is thought to exist really exists.4

Now, of course, their results are not conclusive. They need to be replicated, and if replicated, they only rule out the most reasonable distributions of dark matter that have been suggested. You can construct a dark matter distribution that has a truly odd shape but is still consistent with the both standard view of dark matter and the results of this study. Also, like almost all studies in astrophysics, there are assumptions involved in reaching the conclusion. For example, the researchers assumed that red giants are distributed smoothly both above and below the plane of the galaxy. That’s a standard assumption, but it might not be true.

4. C. Moni Bidin, G. Carraro, R. A. Méndez, and R. Smith, “Kinematical and chemical vertical structure of the Galactic thick disk II. A lack of dark matter in the solar neighborhood,” accepted for publication in the Astrophysical Journal, available online.
Return to Text