Skip to content
Screens are everywhere. It’s very hard to avoid them. However, many health organizations recommend that parents limit the amount of screen time children and adolescents have. First, the health effects of excessive screen time have been well documented. Children who watch TV, computer, phone, and tablet screens a lot don’t exercise much. That leads to some very poor health outcomes, such as obesity. Second, a recent study indicates that there are significant negative psychological effects associated with a lot of screen time.

Psychological research is difficult for many reasons. Whenever you deal with people, you have to try to control for all sorts of variables that affect each subject, and those variables are often significantly different in different subpopulations. In addition, some of outcome measures are subjective, at best. As a result, psychological studies often have conflicting results. However, this one seems to do a good job getting over those hurdles. It contains a lot of subjects (40,337) who were randomly selected, leading to an averaging-out of at least some of the variables. Also, it used the results of the National Survey of Children’s Health (NSCH), which was done in 2016. This survey was given to the people who know the subjects best: their caregivers. It also asks a lot of fairly objective mental health questions, such as whether or not the subject was ever diagnosed with anxiety or depression.

The survey also asked the subjects’ caregivers the following questions:

a) On an average weekday, about how much time does [child’s name] spend in front of a TV watching TV programs, videos, or playing video games?

b) On an average weekday, about how much time does [child’s name] spend with computers, cell phones, handheld video games, and other electronic devices, doing things other than schoolwork?

The researchers added the results of both questions to get the total amount of screen time the subject has each weekday. They then correlated that number to the mental-health-related questions on the survey. The results were rather alarming.

Consider, for example, the question about whether or not the subject has ever been diagnosed with anxiety or depression. Here are the results of that question, graphed against the subjects’ screen time: 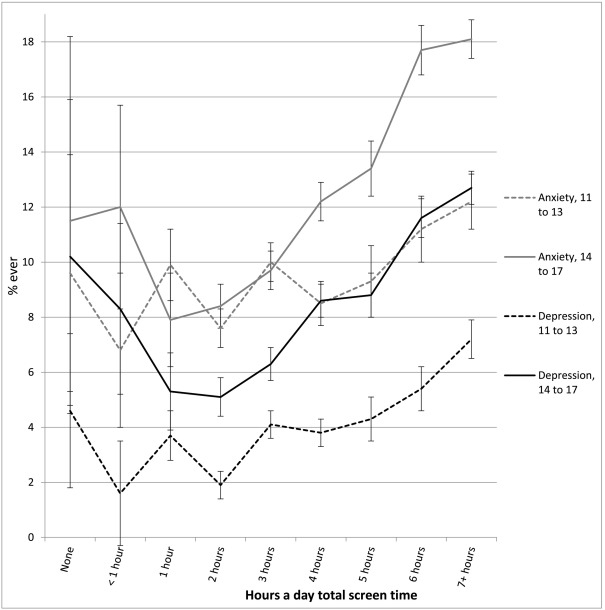 Now look at the solid, black line. This is for subjects aged 14-17 who have been diagnosed with depression. There are huge statistical errors associated with teens who have no screen time, less than 1 hour of screen time, and one hour of screen time each day. That means there are very few teens like that, and it also means we can’t really draw any conclusions from those data points. However, once you get to teens with 2 or more hours of screen time each day, the error bars become manageable. If any parts of different error bars end up having the same value, we say the error bars overlap and we can’t draw any real conclusions when comparing those data points.

There are several graphs like that one, and they all show that after a certain number of hours per day, more screen time means a higher likelihood of poor psychological outcomes. In the end, the authors state:

Children and adolescents who spent more time using screen media were lower in psychological well-being than low users. High users of screens were significantly more likely to display poor emotion regulation (not staying calm, arguing too much, being difficult to get along with), an inability to finish tasks, lower curiosity, and more difficulty making friends. Caregivers also described high users as more difficult to care for and as lower in self-control. Among adolescents, high (vs. low) users were also twice as likely to have received diagnoses of depression or anxiety or needed treatment for mental or behavioral health conditions. Moderate users were also significantly more likely than low users of screens to be low in well-being and, among 14- to 17-year-olds, to have been diagnosed with depression or anxiety or need mental health treatment.

I think this conclusion is justified based on the data, and it should motivate parents to limit their children’s screen time!