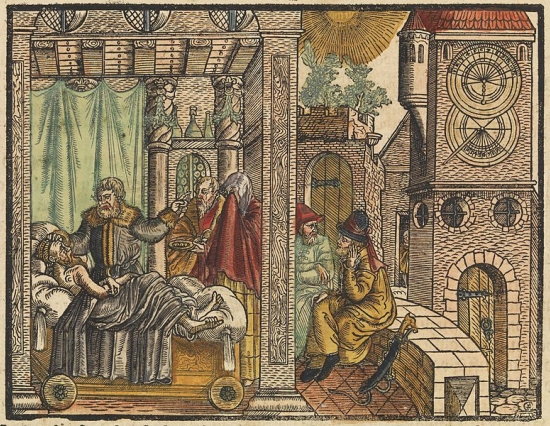 King Hezekiah on his sickbed, as described in 2 Kings 20:1-11 (click for credit)

In 2 Kings 18-20, Isaiah 36-39, and 2 Chronicles 29-32, the Bible discusses the reign of King Hezekiah, who had several interactions with the prophet Isaiah. For example, the woodcutting shown above depicts 2 Kings 20:1-11. The king is dying, but the Lord hears his prayer and Isaiah tells him he will be healed. The King asks for a sign, and Isaiah causes a shadow to move in the direction opposite of the direction the sun would make it move.

Several extraBiblical references to King Hezekiah have been found, including a bulla (clay seal impression) bearing the phrase, “Belonging to Hezekiah, (son of) Ahaz, king of Judah.” However, there are no known extraBiblical references to the prophet Isaiah, at least not until now. While it is by no means certain, there is good archaeological evidence that a bulla from the prophet Isaiah has been found in the same area.

As discussed in Biblical Archaeology Review, Eilat Mazar (who also discovered King Hezekiah’s bulla) reports finding several other bullae in the same excavation. One bulla, found only 10 feet from King Hezekiah’s bulla, might very well belong to the prophet Isaiah. As Mazar writes:

Alongside the bullae of Hezekiah and the Bes family, 22 additional bullae with Hebrew names were found. Among these is the bulla of “Yesha‘yah[u] Nvy[?].” The obvious initial translation, as surprising as it might seem, suggests that this belonged to the prophet Isaiah.

It would make sense to find a bulla from Isaiah in the same excavation as bullae from King Hezekiah, but the conclusion is not ironclad. The name is pretty clear, but the last part, “Nvy[?],” is not. According to Mazar, the last part should signify the word “prophet,” but only if there is an aleph (’) at the end (where she put “[?]”). As she says:

Whether or not the aleph was added at the end of the lower register is speculative, as meticulous examinations of that damaged part of the bulla could not identify any remnants of additional letters.

So this bulla might just belong to a person named Isaiah who was not a prophet. However, given the archaeological context of the find, as well as the damaged nature of the artifact, there is at least a strong possibility that it represents the first extraBiblical evidence for the prophet Isaiah.