NASA’s project “Juno” lifted off today at approximately 12:30 PM. It’s destination: the planet Jupiter. I encourage you to watch the two-minute video of the launch below. It still fills me with wonder that we can launch a rocket into space and then plan its flight so it reaches a planet that is hundreds of millions of miles away from earth! This video is especially interesting, because the rocket had a camera facing down, so you not only get to see the surface of the earth as the rocket races away from it, but you also get to see the solid rocket boosters fall off as they run out of fuel.

Even though the rocket launched today, Juno will not reach Jupiter until July of 2016. Why does it take so long to get there? Well, Jupiter can be somewhere between 390,682,810 miles and 576,682,810 miles away from earth, depending on when you check. However, it wouldn’t necessarily take almost five years for the spacecraft to travel that far. It takes that long because Juno will travel a lot farther than that. 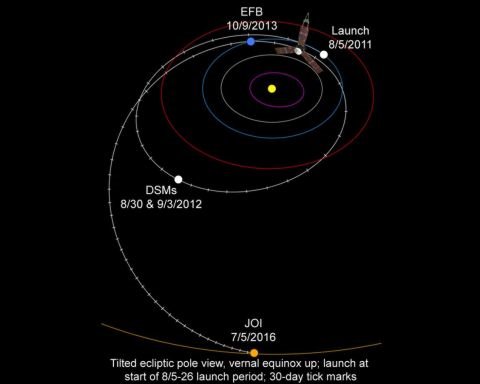 So Juno will launch from earth and then start orbiting the sun, much like a planet. In late August and early September of 2012, it will then execute two deep space maneuvers (DSMs) to changes its orbital path. Essentially that means it will fire its thrusters to adjust its course.

Why does it do that? Because it needs to fly by earth again to get a gravity assist. That means as it passes by earth, the gravitational attraction between the spacecraft and earth will increase the spacecraft’s speed relative to the sun. In the drawing, the blue circle shows where the earth will be when that gravity assist is supposed to take place. With the extra speed that it gets from the gravity assist, Juno’s orbit will be altered once again, putting it on track to arrive at Jupiter on July 5, 2016.

Why take such a roundabout path to get to Jupiter? Because it is the path that uses a reasonable amount of fuel. If we tried to steer a rocket along the shortest path between earth and Jupiter, it would be fighting the sun’s gravity most of the way. That would take more fuel than the spacecraft could hold. By using this trajectory, the sun’s gravity and the earth’s gravity do most of the work. That makes the amount of fuel the spacecraft must carry reasonable.

Even though I doubt that Juno will provide any insight into hypothetical naturalistic origins for Jupiter, it will collect an enormous amount of useful data, which will help us better understand the planet. For example, we know that Jupiter is a gaseous planet, made mostly of hydrogen and helium. However, many astronomers think it has a solid core. Juno will be able to determine whether or not that is the case, and if such a core exists, Juno will be able to determine its composition, size, and mass. In addition, Juno will produce a detailed map of Jupiter’s magnetic field, and it should be able to determine a large amount of detail regarding Jupiter’s atmosphere and how it behaves.

Another thing we will learn from Juno is how well solar power works when it comes to powering instruments on a spacecraft. Up until now, all NASA spacecraft have used some form of nuclear energy to power their instruments. However, Juno will use three solar panels to turn the sun’s light into electricity so as to power its instruments. This is a more environmentally-friendly solution, so I hope that it works as well as NASA engineers think it will.

Isn’t it amazing that we can launch a bunch of scientific instruments into space, plan an incredibly roundabout path for those instruments to get to a planet that is hundreds of millions of miles away, and then learn all those details about the planet when the spacecraft gets there? You can literally thank God for this, because without Christianity, I doubt that any of it would have occurred!

8 thoughts on “We Have Liftoff!”