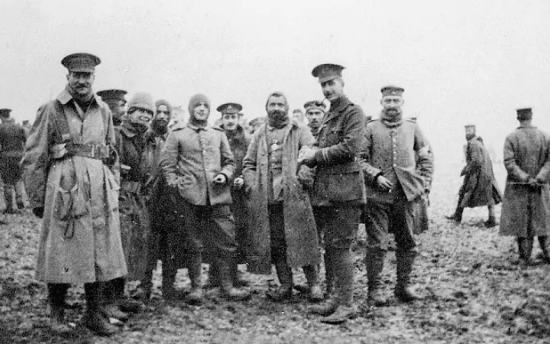 English and German soldiers celebrating Christmas on the Western Front in 1914.

It’s Christmas time again, and I am in the midst of preparing for many things, including the Christmas Eve service at church. I have been asked to do a short skit about Christmas. You can find some of my past attempts at dramatizing Christmas here, here, here, and here. The one I am doing for this year’s Christmas Eve service is much shorter, and it focuses on a remarkable event that happened during World War I: The Unofficial Christmas Truce of 1914. I think it illustrates the “peace, good will toward men” aspect of Christmas in a very tangible way. Parts of the drama (like the first four sentences) come straight from letters written by soldiers who participated in the event.

Ideally, the person doing the skit should be dressed in something like World War 1 gear. Honestly, a helmet and a long, ratty green coat over khaki pants would probably be good enough. An old-style rifle propped up next to him would be ideal. He should be sitting on a small stool or something like that (I will be sitting on one of the stairs that are on stage) and writing a letter.

As is the case with all of my dramatic material, please feel free to use this in any way you think might edify the Body of Christ. I would appreciate a credit, but there is no copyright on this piece.

On earth, peace, good will toward men

I think I have seen one of the most extraordinary sights today that anyone has ever seen. About 10 o’clock this morning, I was peeping over the parapet when I saw a German, waving his arms, and presently two of them got out of their trenches and came towards ours. We were just going to fire on them when we saw they had no rifles. So one of our men went out to meet them and in about two minutes the ground between the two lines of trenches was swarming with men and officers of both sides, shaking hands and wishing each other a happy Christmas.

The Germans offered us some cigars, so I went back to my trench and found some extra jam and corned beef. I guess some of the other men had done the same thing, because pretty soon, the Germans were eating eagerly. I figured that they must have been short of food, because while I didn’t understand hardly anything they said, I could tell that this was probably their first good meal in days. Funny, just a few hours earlier, I was complaining about the food. Seeing the Germans tear into it made me realize that I should have been grateful for what I had.

After a while, someone threw a football from a trench, and we all started kicking it around. I couldn’t believe that I was playing footie with the same men I had been shooting at the day before. After a while, our men started singing “Silent Night.” I guess the Germans knew the same song, because they started singing it in German. As time went on, we found more Christmas songs that both sides knew, and we sang them, too. I will never forget the feeling of hearing men sing the Christmas carols I know and love in a completely foreign language. God truly speaks to all men, doesn’t He?

After a while, some felt the need for sleep, so men started walking back to their trenches. The Germans went to their side, and our men went to our side. I knew that this short respite from the war couldn’t possibly last forever, but I wanted it to. I really wanted it to. I stayed until the very last German started making his way back to his trench. As I started to go back to mine, he turned to me and said, “Frohe Weihnachten.” Earlier, I had learned that this was the German phrase for “Happy Christmas,” so I said it back to him in English.

Back in the trench, I asked the chaplain to read the Christmas story from the Bible. He started reading from the second chapter of Luke, and when he read the words of the angels, “Glory to God in the highest, and on earth peace, good will toward men,” it meant more to me than it had ever meant before. Yes, even during the horror of war, the Christ child can still bring peace on earth, good will toward men.

May your Christmas be as happy as mine was this day.