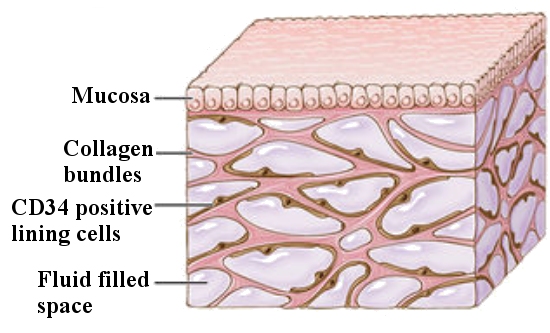 In one of my online biology classes last week, a student asked if I had any comments on the new organ that was just discovered in the human body. I didn’t have any comments, because I didn’t know anything about it. I expressed a lot of skepticism, saying that with all the imaging techniques available to scientists, it’s hard to imagine that an organ in the human body has been missed. However, I promised the student I would look into it, and while I hesitate to call it a new organ, it turns out that a new feature of the human body has most certainly been discovered!

You can read about it in the open-access article published by Scientific Reports. As shown in the illustration above, the researchers found that wherever tissues are stretched or compressed (like the lungs or even the intestines), there is a network of fluid-filled spaces underneath. In the illustration above, think of the part labeled “Mucosa” as the lining of an organ. Underneath that lining, there is a mesh of collagen proteins and elastin proteins (elastin is a part of the “collagen bundle” in the illustration). Those proteins have specific cells attached to them that react to CD34, a stain used to highlight a feature of certain cells when they are viewed under a microscope. In between this mesh of proteins and cells, the spaces are filled with fluid.

For a long time, anatomists have understood that there is a lot of fluid in between the cells of an organism. It is called “interstitial fluid,” and it makes up about 16% of the human body’s weight. It bathes the cells, keeping their environment reasonably constant and serving as way that cells can exchange chemicals with the rest of the body. It comes from the blood, and then it drains into the lymphatic system, where it is cleaned and returned to the blood. So the fluid found in those spaces is not new. The fact that the fluid is found in a mesh of proteins and cells and forms the sponge-like structure illustrated above was completely unknown up to this point.

How did medical scientists miss this for so long? Because the typical way we study tissues microscopically is to cut them into thin strips and then add stains to those strips to highlight the features that we want to study. Specific stains (like CD34) tend to highlight specific features of the tissue, making it easier to see them under the microscope. This process is usually called “fixing” the tissue for microscopic examination, and it destroys the structure.

How did these scientists find what the fixing process destroys? They were using a relatively new technique called “probe-based confocal laser endomicroscopy.” Anything with such a long name has to be high-tech, right? Essentially, a camera is put on a cable that can be snaked into the body. That’s an “endoscope,” and it has been around for a long time. The new aspect of this technique is that the camera is equipped with a laser and several sensors designed to detect the light that comes back from the tissue once the laser lights it up. Those sensors send information back to an imaging system, and it produces a microscopic view of the tissues.

So rather than looking at processed tissue in a microscope outside the body, the researchers pushed a high-tech microscope inside the body and looked at the tissues as they exist there. This, of course, gets rid of any effects caused by the fixing process. Initially, the researchers were using the technique to look for cancer in a patient’s bile duct. However, when they saw this structure they couldn’t recognize, they decided to look at other parts of the body (like the entire digestive tract, bladder, skin, and arteries), and they found it there as well! Eventually, they were able to figure out that they could preserve this structure for analysis outside the body if the samples were quickly frozen before they were put through the fixing process.

Why did my student say that this is a new organ? Because the popular science media (like National Geographic and EurekAlert) are calling it that. However, the researchers never call it an organ. Instead, they describe it as:

…a previously unrecognized, though widespread, macroscopic, fluid-filled space within and between tissues, a novel expansion and specification of the concept of the human interstitium.

The term “interstitium” refers to the sum total of all the interstitial fluid in the body. So this isn’t really a new organ. However, it does tell us that, like all of nature, the interstitium is significantly more complex and well-designed than we had previously imagined. Indeed, the researchers also write:

The more we learn about nature, the more it reveals the majesty of its Creator!