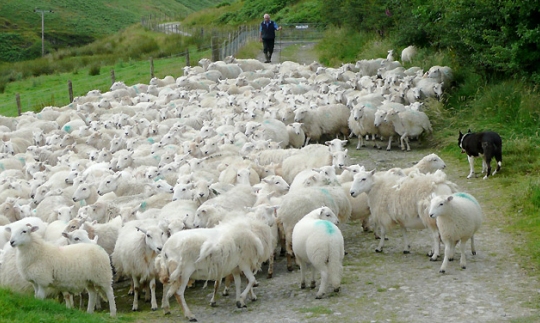 If a shepherd has a sheep that is always straying and getting into trouble, sometimes what the shepherd will do is break two of the sheep’s legs. Then the shepherd would set the bones and carry the lamb on his shoulders. It would take about five to eight weeks for the sheep’s bones to heal, and in that time, the lamb would grow closer to the shepherd. Once the sheep was well, he wouldn’t want to stray anymore because of the bond that developed between him and his master.

Maybe something traumatic has happened in your life because this is God’s way of breaking your legs.

Like the other two sermon illustrations I wrote about, this one is false. Breaking an animal’s bone is a risky business, and it causes an enormous amount of trauma. In addition, there are chances for complications, poor recovery, etc. In his classic book The Sheep, William Arthur Rushworth discusses what you should do with a sheep that has a broken leg.1

A sheep will, as a rule, nurse a broken leg and make a good recovery if the parts have been properly dressed, but unless the animal be a valuable ram or ewe, especially desired for breeding purposes, it is best not to try treatment, but to turn the animal at once over to the butcher.

I could not find any work from any reputable source that indicates a shepherd would ever intentionally break a sheep’s leg.

I did manage to track down what might be the original reference for the sermon illustration, however.2 It is in a collection of sermons given by Robert Boyd Munger, who wrote the well-known book My Heart — Christ’s Home. In the relevant sermon, Munger says that a shepherd in Syria told an American tourist that he had intentionally broken a sheep’s leg because it would not stay with the flock. The shepherd supposedly went on to say that when the sheep finally healed, it would trust the shepherd and never run away again.

Even though I couldn’t find any reputable source that talked about intentionally breaking a sheep’s leg, I did find a reputable source that talked about intentionally braking a sheep’s leg. In the January/February 2013 issue of Sheep! magazine, someone wrote in asking about this sermon illustration. The editor replied that there is something known as a leg clog that is temporarily tied to the leg of a sheep or goat that is hard to control. Some call the clog a “brake,” and tying it to the leg of the animal is sometimes called “braking the leg.” The editor writes:3

I have personally seen the use of clogs on goats, but not with sheep, here in southern Appalachia decades ago. I didn’t like what I saw, but I must confess the man who used them was almost wizard-like in his success and ease of handling all classes of livestock except maybe swine.

1 Response to Another Bad Sermon Illustration