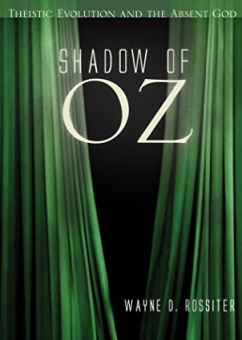 Dr. Wayne D. Rossiter earned his Ph.D. in ecology and evolution from Rutgers University in February of 2012 and is currently an assistant professor of biology at Waynesburg University. His book, Shadow of Oz, has already caused me to write two blog posts (here and here). In one of those posts, a commenter called Rossiter’s book a “must read,” and I have to agree. While I have issues with some of the content, on the whole it is a valuable addition to the wealth of information that has already been written on the subject of origins. As a result, I encourage you to read this book and seriously think about its contents.

In some ways, the main thrust of his book is obvious: the standard view of Neo-Darwinism (random mutations filtered by natural selection) is incompatible with the Christian faith. I don’t know many people who would disagree with that statement. Nevertheless, the way Rossiter makes that point is rather profound. Early on in the book, for example, he gives five extended quotations from different authors regarding the history of the universe. The first and fourth are from Dr. Carl Sagan (atheist), the second is from Dr. Richard Feynman (atheist), the third is from Dr. Richard Dawkins (atheist). The fifth is from Dr. Karl Giberson (Christian who is a staunch evolutionist). The passages are indistinguishable, and that’s the point. As Rossiter says:

I could have chosen any number of brief atheistic accounts of the history of the universe, and not one of them would differ in any functional way from the one offered by Giberson. (p. 25)

Rossiter’s discussion of Dr. Kenneth Miller’s views on origins is equally insightful and perhaps even more damning. He shows that, like Giberson, the “creation” account that Miller believes is indistinguishable from that of an atheist. Further, he shows in rather stark terms just how confused Miller is when it comes to what he believes. For example, Rossiter quotes Miller as saying that he tells his students that he believes in Darwin’s God. However, as Rossiter makes clear, that statement is pure nonsense:

…as Miller admits earlier in his book, Darwin was not a believer in God. He became a staunch agnostic, who demanded strict naturalistic answers for life’s workings. As so, it’s quite appropriate that Miller should claim to share Darwin’s view. (p. 163)

In fact, this is where Rossiter gets the title of his book. He says that for theistic evolutionists like Miller and Giberson, there is no way to detect God in His creation. As a result, God ends up looking a lot like the Great Oz in The Wizard of Oz.

This, of course, is an excellent point. If you can’t see God in his creation (as Romans 1:20 clearly says you can), then there is really no reason to believe in Him.

But wait a minute. Science can’t explain the miraculous, so how can you see God when you are using science to study His creation? Rossiter’s answer is simple, and it is something I have to tell my atheist scientific colleagues all the time:

…while a miracle cannot be explained, it can be observed, and that’s a significant difference. It leaves a tangible fingerprint of the divine. (p. 79)

Indeed, science cannot explain miracles, but it cannot exclude their existence, because they leave tangible evidence behind. In addition, allowing for the existence of miracles doesn’t go against science. As a scientist who has done a lot of original research, I can tell you that I see unexplainable data all the time. That doesn’t mean my experiment is invalid. It just means that those data are outliers, and I cannot use them to make general conclusions. Miracles are outliers in science, and when you exclude them simply because they cannot be explained, you are actually working against science.

Now I must point out (as Rossiter does) that not all theistic evolutionists are as slavishly committed to the standard view of Neo-Darwinism as Giberson and Miller. This leads to one of the weaknesses I see in the book. Rossiter mentions a few theistic evolutionists who think God has “guided” the process along. He doesn’t quote them extensively, which is probably why I think he ends up mischaracterizing their views a bit. While there are a few examples of this, I will concentrate on Dr. Alvin Plantinga, as I am very familiar with what he has written.

Plantinga is a theistic evolutionist, and he thinks God guided the process of evolution. Rossiter says that, like Miller and Giberson, Plantinga ends up with a God who cannot be observed in His creation. However, that’s quite incorrect. In fact, Plantinga’s “Evolutionary Argument Against Naturalism” specifically says we know that God must have guided the process along, because naturalistic evolution would not produce creatures that believe in true statements. Since humans can believe in true statements, evolution cannot be naturalistic. I don’t find that argument convincing, but Plantinga does, and as a result, he clearly believes in a God that can be seen in His creation.

How does Plantinga believe God guided evolution? He says one possibility is that God works on the quantum level. In the weird world of quantum mechanics, nothing is deterministic. In the end, there is simply a range of probable outcomes for every situation. It’s possible that God controls some of those probabilities, forcing events that would guide the process of evolution instead of allowing them to be completely random. Rossiter addresses this idea and doesn’t like it. In the end, he says that if God “rigged” the possible outcomes, then you don’t really believe in the standard Neo-Darwinian view, because it requires completely random mutations.

However, I don’t really agree with Rossiter on that point. It’s all a matter of how many times God had to “rig” the probabilities, compared to how many times mutations could happen randomly. If the process of evolution required a ridiculous number of mutations, but only a few key ones had to be nonrandom, it would be very hard to detect them. As a result, you could generally treat mutations as random, with only a few outliers that would be very hard to detect. Theoretically, if we had full knowledge of the process of evolution, we could then see those outliers, but given our limited understanding of the process, it is quite possible that the nonrandom aspects of evolution simply escape us at this point in our understanding.

This leads me to what I think is the real strength of Rossiter’s book. Mostly in Chapter 6, he lays out in no uncertain terms how the “flagellate-to-philosopher” view of evolution is wildly inconsistent with the data. As I discussed previously, he lays waste to the claim of a universal genetic code as evidence for common descent. He points out how the fossil record is incredibly discontinuous. He discusses how our ability to compare DNA has destroyed Darwin’s hope of a “tree of life.” He discusses the absurdity of adaptionist explanations for things like the speed of a cheetah. He also argues that evolution has no predictive power, which is something that atheists Fodor and Piattelli-Palmarini make in their book, What Darwin Got Wrong.

Since this review is getting long, I will close with just one more excellent point that Rossiter makes. Since the origin of life is such an incredible enigma for naturalists, some would like to separate it from the process of evolution. Thus, it is common for evolutionary evangelists to say things like, “The origin of life is not a part of the theory of evolution.” However, as Rossiter so aptly puts it:

While it is often argued that Darwinian evolution does not care how life began, but only describes what happened thereafter, this is untrue. If we begin the project with an intelligently designed system, then everything that follows suffers from the problem of having been the result (directly or indirectly) of intentionality. (p. 111)

In other words, the theory of evolution does, indeed, depend on the origin of life, because life’s origin clearly affects how evolution can work.

As you can see, Dr. Rossister has done a masterful job of tackling this important subject, and I think that anyone who is interested in the origins debate should read his book.

14 thoughts on “Review of Shadow of Oz”