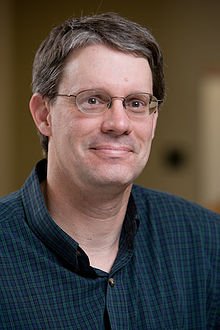 I am currently at the Southeast Homeschool convention in Greenville, South Carolina. It is a wonderful experience. The conference is very well attended, and I have spoken to many, many homeschoolers over the past day and a half. The most amazing thing for me is speaking to the homeschooled students who have come to the convention. It is incredible to see what God is doing in their lives. Some of the most impressive people I have met in my entire life are homeschooled students!

As I noted in my previous post, I was excited to see that Dr. Peter Enns is a speaker at this convention. Unfortunately, I was not able to attend his first talk, as it conflicted with a talk that I was giving. However, I was able to attend his second talk, and I was very glad that I did. While I had read some of his work (most notably Inspiration and Incarnation: Evangelicals and the Problem of the Old Testament), I had never seen him in person. It will probably come to a surprise to some of the commenters on my previous post that he did not have horns growing out of his head or any sign of a red tail (as far as I could see). Instead, he came across as an incredibly humble man of God who has a genuine love for the Word.

The title of his talk was “The Dark Side of the Old Testament and What We Must Learn from it.” He said that an alternative title was, “Struggling with your faith (and what God is teaching you through it).” It was a down-to-earth, encouraging talk about those times in your Christian life when your faith is tested.

He started the talk with a bit of a joke. He said that because the vast majority of those in the audience are homeschoolers, he was going to assume that everything in our lives is going wonderfully. Our children are all thrilled with their education, they do their work diligently, the family has lots of time to fellowship, and everyone’s walk with Christ is better than it ever has been. That got quite a laugh. Then he turned serious, indicating that, unfortunately, this is often what our fellow brothers and sisters in Christ expect of us. They expect us to always be living in victory and never have any doubts or struggles. Of course, the reality is quite different, and often we don’t know what to do when that reality hits us. Then he said something very profound:

In church, we can talk about any problem except feeling distant from God.

That is both one of the truest and one of the saddest aspects of modern Christianity. Rather than being a place where struggling Christians can come for help, church is often just a showcase where the appearance of Christian victory is more important than the reality of helping our brothers and sisters in their spiritual walk.

One of the goals of his talk was to show that struggling in your Christian walk is nothing to be ashamed of. In fact, it’s quite normal. As someone who deeply loves the Word, he did that by showing us parts of the Old Testament that often don’t make it into a typical church service. For example, he discussed Psalm 73, where the psalmist struggles with stumbling, and Psalm 83, where the psalmist implores God to stop being silent. These Psalms are called “lament Psalms,” because they deal with the troubles that people experience. He then gave a surprising fact – roughly half of the Psalms are lament Psalms! He then discussed Job and Ecclesiastes, which both deal with men of God who are struggling to understand God and how He relates to them.

At the end of this discussion, he made the obvious but profound point that these Scriptures indicate that struggling in your Christian life is normal. He calls this the “dirty little secret of Christianity.” Even though many Christians are loathe to admit it, we all struggle in our spiritual walk. Not only should we not be ashamed of this, but the Scriptures clearly tell us that this happens, even to great men of God! If it happened to them, it will happen to us.

So what is the purpose of these struggles, which seem to be a normal part of our life with Christ? According to Dr. Enns, it is to strip away self so as to allow us to become more like Christ. He gave two very important Scriptures that apply here:

“For you have died and your life is hidden with Christ in God.” -Colossians 3:3

“that I may know Him and the power of His resurrection and the fellowship of His sufferings, being conformed to His death” -Philippians 3:10

In the question/answer session, I noted that there is a strong physical principle – “no pain, no gain.” If you want to be an athlete, for example, you will have to regularly work out to the point of pain. Only then can you become a better athlete. I asked him why the Christian church is hesitant to admit that this truth applies spiritually as well. He said that it was probably a cultural thing. Our culture tends to equate the Christian life with blessings rather than the more Biblical idea that the Christian life is about taking up your cross and following Him. However, he said he would have to correct my statement a bit, because in his mind, the spiritual truth is more like:

no death, no gain

That is so very true!