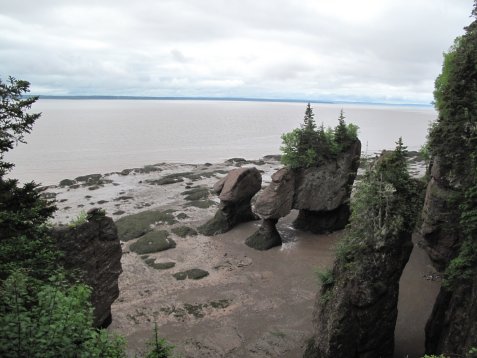 If you are sick and tired of reading about the rocks at Hopewell Cape on the Bay of Fundy, I think this will be my last post about them. In my first post about my Canadian speaking trip, I showed a picture of them and briefly mentioned them. In the next post, I gave a relatively detailed account of the tides that have carved them.

In that second post, a commenter suggested that it must have taken the tides millions of years to carve the rocks into those interesting shapes. Another commenter, who is a geologist, did some digging and posted three references to geological studies of the rocks. The third one1 seemed very intriguing, so I decided to get the paper and read it for myself.

The study discussed several details regarding the rocks (which they call “stacks” and “stack-arches”), including the fact that they were most likely carved over hundreds of years, not millions.

In my reply to the geologist commenter, I had suggested that the suspended sediments in the water must have been a significant factor in the erosion that shaped the rocks. The resonance that enhances the tides in the Bay of Fundy keeps the sediments churned up in the water, and those sediments rubbing against the rocks must do a lot of the erosional work. The authors of the study agree:

The smoothness of the floor and lower parts of the walls of the notches, and the occurrence of blankets of sand and gravel suggest that abrasion must be an important erosional process on the shore platform and at the cliff foot.

However, the question still remains as to why the rocks get separated from the rest of the mainland and why they end up forming interesting shapes. One explanation could be that the rocks which remain after all that erosion are harder than the rocks which have eroded away. However, the authors don’t seem to think that is the most important factor. Instead, their study led them to conclude that all the rocks in the area are inundated with fractures (joint planes and faults). The tides have opened those fractures, cutting out large pieces of rock. In other words, it’s not so much that the missing rocks have eroded away. It’s that they have been cut away. They say that in most cases:

…the rocks are no more resistant in stacks and in the stack-arch than in the adjacent platform and cliff, and in some cases they are even weaker. Most stacks, arch-tunnels and caves at Hopewell Rocks result from dissection of the rock mass along prominent joint planes, rather than from differences in rock hardness.

So most of the the rock formations that are left aren’t any harder than any of the other rocks. They are just what’s left after all the fractures are opened up, destroying the wall of rock that used to be there.

Of course, the most fascinating thing the authors discuss is the timeframe associated with forming theses interesting rock structures. Most people are conditioned to think that such erosion takes millions of years. However, in this case, there is strong evidence that the timeframe is much shorter. The authors discuss another reference2 that contains some pictures from 1983. Even though those pictures were only 15 years old at the time of the study, they show significant changes. There is one formation that is prominent in the 1983 pictures but was only a low stump in 1998. Another formation in the 1983 pictures was completely gone by 1998. Based on those pictures, they conclude:

The photographic evidence therefore suggests that one or two stacks are destroyed about every 12 to 16 years. Therefore if one stack is eroded every 16 years, all 16 of the stacks at Hopewell Rocks will collapse within the next 256 years. Alternatively, if two stacks are destroyed every 12 years, all 16 stacks will be destroyed in only 96 years. If it can also be assumed that stacks are replaced at approximately the same rate as they are being removed, then the evidence implies that the 16 stacks at Hopewell Rocks have developed in the last 96 to 256 years. (emphasis mine)

While our poor education system has conditioned us to think that geological processes are very slow, taking millions of years to produce recognizable changes, that simply isn’t the case here. Now, of course, this doesn’t mean that all geological formations are produced in hundreds (or thousands) of years. Nevertheless, I do think we have been conditioned wrongly when it comes to how we view geological processes that occur on earth.

Perhaps the rocks at Hopewell Cape in the Bay of Fundy will keep you from automatically thinking “millions of years” the next time you see an amazing geological formation.