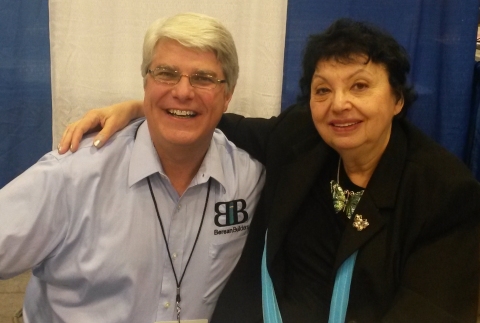 Inge Auerbacher and me at the Texas Homeschool Convention

In a recent post, I wrote about the Texas Homeschool Convention. I thought it would be a memorable one, because I was going to be able to meet and listen to an incredible person who I was able to interview late last year – Inge Auerbacher. Well, it was a memorable convention, for more than one reason! I will write about the other reasons in a subsequent post, because meeting and listening to Inge was a truly singular experience.

I ended up arriving late to her talk, because I had to give a talk that overlapped with hers a bit. As a result, I had to attend a follow-up version of the same talk to get her entire story. I was thrilled to see the huge turnout she had. I am glad that the homeschoolers who were in attendance understood and took advantage of the amazing opportunity they had been given. I was even more thrilled to see what happened at the end – a standing ovation. I have been to a lot of homeschool conferences over the years, and I have seen a lot of “rockstars” in the homeschooling community give a lot of talks. I don’t remember ever seeing an audience give a standing ovation at the end. I am so glad they did that for Inge, because she deserved it.

She spoke in a familiar tone, as if she was our mother telling us an important story that we needed to remember. The story, of course, was how she survived the horrors of the Holocaust. To help us visualize what happened to her, she showed both pictures and illustrations. The pictures came from multiple sources, and the illustrations had been made for her by an artist. The mix of real-life photos of Jewish people being taken to prison camps and artistic representations of her personal experiences was very effective. Towards the end, she showed pictures of when she returned to the site of the concentration camp many years later. It was chilling.

She talked about being hungry all the time. She said that lice, bedbugs, rats, and hunger were her constant companions. She also talked about an outbreak of scarlet fever that raged through the camp. She got it, along with many other children. They were put in a crowded ward (she had an illustration of it), and they couldn’t see their parents. She and the other children were terrified that their parents would be taken away from the camp while they were locked up in the ward. Fortunately, that didn’t happen.

Unfortunately, something else did happen: Lots of the children died from the scarlet fever. She said that the first time she had ever seen a dead body was there in the ward. She saw a sheet laid across the floor, and when she looked under the sheet, she saw dead children. At the time, she was under 10 years old. I can’t imagine dealing with the sight of human death at such a young age.

She said that after the scarlet fever epidemic had passed, there was one girl who was very sick. She was told to never go near the girl, because she could catch what this girl had, and it might kill her. Nevertheless, she (and the other children) did spend time with the girl, playing “games” in the trash and looking for “toys” like a piece of string or some rags that could be made into clothes for a doll. This girl had tuberculosis, and not surprisingly, Inge ended up getting it. The disease didn’t fully manifest until after she was liberated from the prison camp and immigrated to the U.S. At that point, she was eleven.

She survived tuberculosis because of one thing: an antibiotic known as streptomycin. Later in life, she learned that streptomycin was developed by a graduate student named Albert Schatz, but his thesis advisor, Selman Waksman, took full credit for it. She learned about Dr. Schatz and tracked him down, simply to thank him for making the medicine that saved her life. She said she would never forget meeting him and hugging him. In fact, she ended up writing a book about streptomycin, Dr. Schatz, and the friendship that developed between them. It’s called Finding Dr. Shatz. I haven’t read it, but I certainly plan to!

The highlight of the talk, however, was at the end. She read an original poem about how she imagined her best friend’s death at Auschwitz. It reduced me to a blubbering fool. The poem is called “Hold me Tight,” and it can be found in her first book, I Am a Star. That poem alone is worth the price of the book.

Later on, I got to meet Inge in person, and she is not the bitter, angry woman you might think such a life would produce. She is a sweet, gentle soul who is genuinely happy to meet you. I will never forget the talk she gave and the honor I felt meeting her in person.