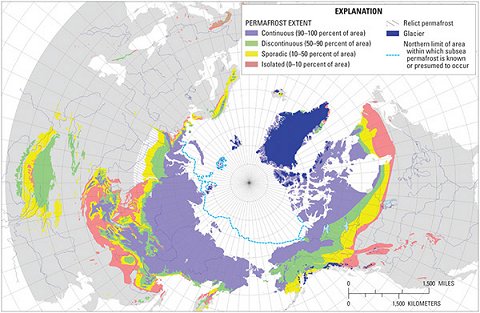 The earth’s polar regions have large amounts of permafrost, a thick layer of soil underground that stays frozen throughout the year. It has been suggested by climate alarmists that as the earth warms, this permafrost will begin to melt, and that will lead to disastrous consequences. Why? Well, there is a lot of organic material in this permafrost, and it doesn’t decompose much, because decomposition is slowed significantly due to the soil being frozen. As the permafrost thaws, decomposition will increase, and that will lead to a significant amount of carbon dioxide and methane being released into the atmosphere. The release of these greenhouse gases, of course, will further accelerate global warming. This affect is known as the permafrost carbon feedback, and here is what the United Nations Environment Programme says about it:1

If the permafrost thaws, the organic material will also thaw and begin to decay, releasing CO2 and methane into the atmosphere and amplifying the warming due to anthropogenic greenhouse gas emissions…The permafrost carbon feedback is irreversible on human time scales. Warmer conditions and increased atmospheric CO2 will enhance plant growth that will remove CO2 from the atmosphere, but this can only to a small degree compensate for the much greater carbon emissions from thawing permafrost.

Notice how strongly this is worded. The effect is “irreversible,” and even though a warmer climate will result in more plant growth, this will not come close to offsetting the devastating amount of greenhouse gases released by the thawing permafrost.

Well, the results of a 20-year experiment have been published in the journal Nature, and not surprisingly, they show that the effect is precisely opposite of the nonsense quoted above.

Seeta A. Sistla and her colleagues visited the U.S. Arctic Long-Term Ecological Research site at Toolik Lake in northern Alaska. There, a greenhouse was installed in 1989 to allow a section of the tundra to warm slowly, and scientists are continually observing the changes that occur as a result. Some of the results were very predictable. For example, short plants with shallow roots gave way to taller plants with deeper roots. In addition, mosses and lichens decreased, while shrubs and leaf litter increased. However, when Sistla and her colleagues measured the amount of carbon contained in the soil beneath the greenhouse, they found no change over the past 20 years.

What happened? As the permafrost thawed, why didn’t the massive decomposition predicted by the United Nations deplete the soil of carbon? The researchers aren’t sure, but they do know that plants put carbon into the soil as they grow. They think that the increased plant growth produced by the warmer temperatures put just as much carbon into the soil as the enhanced decomposition removed. Here is what they conclude:2

Long-term tundra warming increased plant biomass carbon and the dominance of woody plants, altered the structure and activity of the soil food web, and changed both the vertical distribution and turnover of soil carbon without affecting overall soil carbon storage.

We infer from this that 20 years of warming has promoted net ecosystem carbon storage.

In other words, the warmer the Arctic gets, the more carbon dioxide is removed from the atmosphere. Now remember what the United Nations confidently told us. They said that the enhanced plant growth could not possibly offset the devastating amount of carbon released when the permafrost melts. However, the longest-running warming experiment in the Arctic demonstrates just the opposite. In fact, not only does the enhanced plant growth offset the loss of carbon in the soil, it ends up taking in extra carbon, which would fight the effects of any global warming that might have occurred. This is yet another example of earth’s negative feedback mechanisms, which the Creator has put in place so that it resists changes in temperature. You can find other examples here, here, and here.

Now the authors make it clear that this might not be the final word. They say it is possible that this 20-year result represents only some intermediate stage in the permafrost’s response to warming. They say more study has to be done to determine whether or not their results can be extended into the distant future. For right now, however, the results are precisely opposite of the United Nations’ pronouncements.

Why did the United Nations get it so wrong? Because they failed to acknowledge that the earth has been Designed. When you think the earth was thrown together as a result of random interactions guided by the laws of nature, you don’t expect it to have negative feedback mechanisms specifically designed to make the earth a robust habitat for life. Until scientists begin to acknowledge that the earth is the result of incredible design, they will continue to make nonsensical predictions like the one quoted at the beginning of this post.