I expect nearly every creationist and Intelligent Design blog will eventually discuss this, but I thought I would throw in my “two cents” about a study that has serious implications for the creation/evolution controversy. Laura Poliseno and her colleagues have published a study in Nature that has demonstrated a function for a class of pseudogenes.1 The study will result in a radical change in biology’s understanding of what has been disparagingly called “junk DNA.”

Since pseudogenes cannot be turned into proteins, it has long been thought that they are the result of a gene being duplicated at some point in history and then being mutated to the point where the gene cannot be used anymore. Indeed, as a commentary in the same issue of Nature says:

Pseudogenes are considered to be defunct relatives of known genes. 2

What Poliseno and her colleagues have conclusively demonstrated is that at least some pseudogenes are anything but defunct, and they might not even be relatives of known genes.

The study focuses on a gene in the human genome called PTEN. This gene produces a protein that is known to suppress tumors. It has been known for a while that there is a region of human DNA that looks a lot like PTEN but does not produce a protein. Thus, that section was identified as a pseudogene of PTEN.3 In their study, Poliseno and her colleagues refer to this pseudogene as PTENP1.

Now remember what evolutionists think is the relationship between PTEN and PTENP1. They think that sometime in the distant past (either in humans or in some ancestor organism), only PTEN existed. Then, it got copied. The copy started to mutate, and it eventually became nonfunctional. At that point, it became the pseudogene PTENP1. That pseudogene is just a leftover vestige of our evolutionary history, and it serves no purpose. As a result, it is a small part of the vast “junk DNA” that makes up (in evolutionists’ minds) the majority of the human genome. In my opinion, Poliseno and her colleagues demonstrate that this evolutionary story is probably not correct.

To understand what this important study demonstrates, you need to learn a couple of things about genetics. First, you need to understand what a gene is and how it instructs the cell to make a protein. A gene is a stretch of DNA that essentially has a recipe for making a specific protein. The stretch of DNA is copied (actually a negative image is made) by a similar molecule called messenger RNA (abbreviated as mRNA). That mRNA then leaves the nucleus (where most of the cell’s DNA is found) and takes the copied recipe to a ribosome, where the protein is made according to the recipe found on the mRNA. Schematically, we could say:

Gene on DNA –> mRNA that leaves the nucleus –> protein

So this is how the PTEN protein is made. The PTEN gene in the DNA produces a messenger RNA (mRNA) that leaves the nucleus and goes to a ribosome, which then makes the PTEN protein that suppresses tumors.

The second thing you need to understand is relatively new to genetics – the existence of microRNAs. In 1993, Lee and his collegues discovered that a roundworm produces short stretches of RNA from its genome. 4 They found this odd, because proteins require long, long stretches of RNA. They didn’t know what possible use could be made of such a small stretch of RNA. As time went on, more and more of these small stretches of RNA have been found, and they have since been called “microRNAs.”

What do microRNAs do? They bind to a small section on mRNA and keep it from being made into a protein. In other words, they regulate the expression of a gene. So…think back to the PTEN gene. The PTEN gene makes a mRNA. The mRNA leaves the nucleus, but on its way to the ribosome, a microRNA might bind to it. If that happens, the PTEN protein won’t be produced.

Now don’t get lost in all this terminology, because it is very important. Let me review this with a figure: 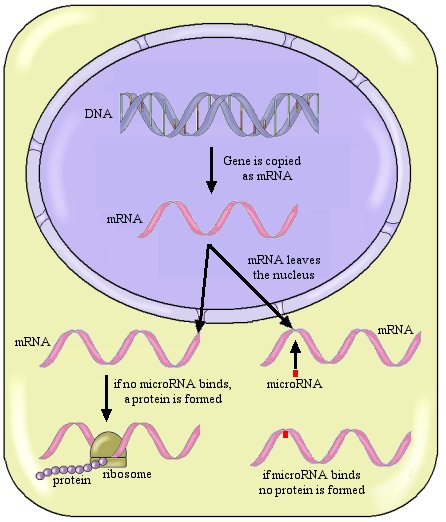 That’s how microRNAs regulate gene expression. They suppress gene expression by stopping the mRNA before it can be used to make the protein for which the gene codes. Geneticists have come to learn that this is a major way in which genes are regulated in nature.

Now you are finally ready to learn what Poliseno and her colleagues found. They found that the mRNA formed by the pseudogene traps microRNAs so that they do not stop the expression of the gene.! In other words, PTENP1 produces decoys that the microRNAs bind to. That way, the microRNAs won’t bind to the PTEN mRNA, and the PTEN protein will be made.

Poliseno and her colleagues show that this relationship exists not only for this particular gene and its pseudogene, but it exists for other cancer-related genes and their pseudogenes. However, I think that their work reaches far beyond cancer research. As the authors state:

An important implication of our findings is that the decoy mechanism may not be limited to pseudogenes, but may include other long non-coding RNA transcripts including ribosomal RNAs, large intergenic noncoding RNAs (lincRNAs) and coding gene mRNAs5

Indeed, their work indicates that much of what was once considered “junk DNA” is probably not junk at all. Instead, it is a very important part of the genome.

Of course, all of this is exactly what creationists and those in the intelligent design movement have been saying for quite some time now. More importantly, however, it shows once again that supposedly “definitive” evidence for evolution is just not correct. Pseudogenes have been cited as conclusive proof of common ancestry among certain organisms. Indeed, a commenter on this blog cited the similarities between the human and chimp GULO pseudogene as definitive evidence that humans and chimps share a common ancestor. After all, he reasoned, we “know” that the GULO pseudogene is just a defunct, mutated version of the original gene. We see mostly the same random mutations in the chimp GULO pesudogene as we see in the human one, indicating that we both received that pseudogene from a common ancestor.

Of course, this new study shows that pseudogenes probably didn’t even form that way. It was always assumed by evolutionists that a pseudogene is a defunct version of an active gene, because it looks so much like the active gene. What else could possibly explain their similarity? Well, now we know what else. The fact that a pseudogene needs to regulate the expression of the active gene is the reason they are so similar! There is no need to postulate the “mutated copy” explanation for the existence of pseudogenes. There is a simpler (and probably better) explanation: Pseudogenes and genes are both necessary for the production of many proteins. The gene makes the protein, microRNAs reduce the expression of the gene, and pseudogenes increase the expression of the gene. Thus, pseudogenes did not come from genes. They came with genes as part of an exquisitely-designed mechanism for regulated protein production!