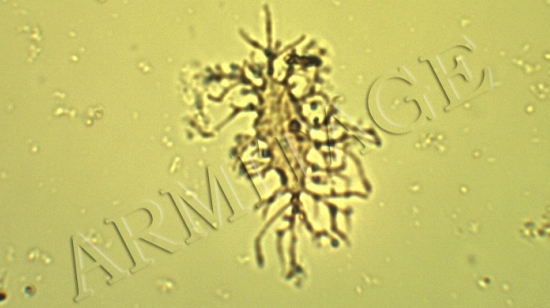 A single bone cell isolated from a Triceratops fossil. (Photo by Mark Armitage)

I was delighted to see that another blog post of mine is the subject of yet another diatribe by Dr. PZ Myers (Creatonists Need Better Evidence Than That). For those who missed it, my post on Mark Armitage’s groundbreaking original research bothered Dr. Myers, and he wrote a response that showed he didn’t really bother to read much about the issue. I wrote a reply that was designed to educate him on the issue. His newest diatribe is a response to that reply. Unfortunately, while Dr. Myers has shown more of an ability to read than he did in his first attempt, he needs to sharpen his reading skills if he ever wants to be informed on the issues that he is attempting to discuss. Perhaps this post will help.

Let’s start with Dr. Myers’s first problem. He doesn’t like the fact that carbon-14 has been found in a Triceratops fossil that is supposed to be millions of years old. In his first attempt at ignoring the data, he claimed:

If the bone was really young, you wouldn’t just be reporting that there was some C14 in it, you’d be reporting an age derived from a ratio.

In my response, I noted that this is just what was reported. The fossil was given a C-14 age of 41,010 ± 220 years. Of course, now he claims that such an age is meaningless. Why? He says that the date indicates there is very little carbon-14 in the fossil – so little that it could be explained by a source other than the Triceratops itself.

But had Dr. Myers bothered to read the post carefully, he would have seen that there are many reasons to discount such an idea. First, as I point out, the processing done on the sample has been worked out in the peer-reviewed literature and is designed to get carbon from the fossil itself and get rid of contaminants.

Second, while a date of 41,010 ± 220 years is near the practical limit of carbon-14 dating, it is not at or over that limit. As I point out in my post, there are much older carbon-14 dates in the peer-reviewed literature, and they are thought to be accurate. Some of those dates are produced with the exact same process as what was performed on Armitage’s Triceratops fossil. If those dates don’t represent a misuse of carbon-14 dating, then Armitage’s date doesn’t, either.

But here is the statement that makes it clear Dr. Myers has not read up on this issue at all:

This, of course, is false, and anyone who has read up on carbon-14 dating should know that. First, the link above lists 20 dinosaur samples, all of which are supposedly older than 100,000 years old, and all of them return an age of well under 50,000 years. Either the samples aren’t older than 100,000 years, Dr. Myers’s statement is wrong, or (most likely) both.

Second, it is common in the literature to report radiocarbon dates in terms of a lower limit. In this study, for example, a sample is reported to be “>52,000” years old. Such a date means that any carbon-14 signal which might have been detected from the fossil could not be distinguished from the noise. If something really is too old to return a carbon-14 age, the age is generally reported that way. Thus, if something really is 100,000+ years old, it should return a value of “>X,” where X represents the maximum radiocarbon age that can be determined in the experimental setup.

Dr. Myers also suggests that underground radioactive sources might have generated the carbon-14 detected in the dating process. While that might sound reasonable, anyone who has read up on this issue knows it can’t explain what has been measured. As calculations presented on my blog indicate, neutron capture simply cannot produce a significant amount of carbon-14 from carbon. Also, the radiocarbon dates of dinosaur bones are not correlated with the amount of radioactivity in the rocks. If radioactive processes were producing carbon-14 in the fossil, the carbon-14 dates would be younger for the fossils from rocks that contain more radioactivity. They are not.

I have spent most of this discussion on the carbon-14 content of Armitage’s fossil, because that is the subject upon which Dr. Myers seems to be the least informed. However, he also doesn’t like the fact that soft Triceratops cells are found in the fossil. At first, he tried to pass them off as cells from insects, fungi, or bacteria, but my response to his first post must have alerted him to his basic histological error: that insects, fungi, and bacteria do not have bone cells. He has now changed his stance to:

My answer to that is…I don’t know. It’s weird.

He seems to think that since it was hard for him to isolate and observe single cells, there is no way that Armitage could do it. That’s hardly a reasonable argument.

I suggest that Dr. Myers actually attempt to read Armitage’s peer-reviewed paper or his Microscopy Today paper. If he does that, he can at least begin to understand the data. Perhaps he will also pick up some laboratory techniques for better isolating and observing single cells.