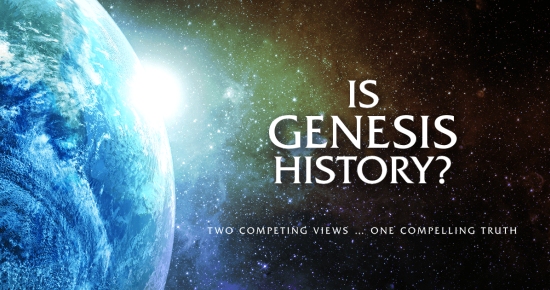 The film Is Genesis History is unique in many ways. As far as I know, for example, it is the first creationist film that was released as a Fathom Event, meaning it was scheduled to be in theaters for a single showing on a single day (February 23rd). Unfortunately, I was speaking at a conference during that showing, so I was unable to go. It was apparently a very popular Fathom Event, because it was then scheduled for two “encore performances” (March 2nd and March 7th). Unfortunately, I was busy on both of those days as well! As a result, I had to wait for the film to come out on DVD. It was released May 2nd, so I ordered it, and then I watched it.

My overall review is mixed. There are some wonderful moments in the film, and there are some moments that are not so wonderful. Before I get into the details, however, it is best to describe the film in general. The star and narrator of the film is Dr. Del Tackett, who originally studied computer science and taught it for the Air Force. He also served President George H. W. Bush as director of technical planning for the National Security Council. His highest earned degree is a Doctorate of Management from Colorado Technical University. He interviews thirteen different PhDs, most of whom are scientists. All of the interviews are designed to investigate the question that makes up the title of the film: Is Genesis History?

The idea of interviewing only people who hold PhDs (another unique feature of the film) was a good one. They were all clearly knowledgeable in their fields, and they all seemed comfortable in front of the camera. Rather than interviewing them in their offices, Tackett went “into the field” with each of them. When he interviewed geologist Dr. Steve Austin, for example, he did so at the Grand Canyon, where Austin has done a lot of his research. When he interviewed microbiologist Dr. Kevin Anderson, he went to Anderson’s laboratory. This made the interviews more interesting and provided some great visuals to go along with the information being presented.

I think the movie’s beginning sequence contained its best moment. In the sequence, Tackett is standing in a canyon, next to a tiny stream that runs through it. He asks the audience how long it would take for the stream to carve out the canyon. He then picks up a rock and says that other rocks in the canyon have been dated to be 350,000 years to 2 million years old. Then, while standing on the rim of the canyon, he tells the audience that the canyon (including the rocks upon which he is standing) is younger than he is; it was formed during the explosive eruption of Mount St. Helens. This dramatic moment provides an excellent reason for the viewer to think about earth’s history differently from the way he or she might have been taught.

After that moment, he begins his interviews. Since he is starting in a canyon, his first interview is with Dr. Steve Austin at the Grand Canyon. He then moves on to the other experts in the film, querying each one of them about how they see their field in the light of Genesis. Most of the interviews contain material that is well-known to those who have studied the origins debate (catastrophic geology, created kinds, soft tissue in dinosaur fossils, etc.), but there is some information of which I wasn’t aware. For example, Dr. Marcus Ross says that when it comes to the fossils of land vertebrates, fossil tracks are usually found lower than the remains of the animals themselves. He says that this is a mystery in an old-earth view of geology, but it is what you expect from a young-earth view, with animals fleeing the Flood waters, so their footprints should be fossilized lower than their bodies.

Even though most of the information wasn’t new to me, some of the visuals that went along with it were quite stunning. When he interviewed Dr. Kevin Anderson, for example, there is microscope video of the soft tissue that he and Mark Armitage found in a Triceratops horn. The video shows the tissue being stretched and then relaxing, demonstrating that it really is soft and stretchy. To me, that was another dramatic moment. It’s one thing to be told the tissue is soft and stretchy, it’s another thing to actually see that it’s soft and stretchy.

There were some other excellent moments as well. I was most impressed with Dr. Arthur Chadwick, a geologist who studies the processes that produce fossils. At his fossil dig, he briefly summarized those processes and showed how they applied to the fossils that were being uncovered. He also had an excellent discussion of transitional fossils, admitting that there are some fossils that evolutionist produce as transitional that are interesting, even challenging. However, he says that the overall view of the fossil record is much more in line with young-earth creationism than it is with evolution. He says that his faith in young-earth creationism is confirmed by his research, but it would take blind faith for him to believe in evolution.

I also really liked the interview with biologist Dr. Todd Wood. While I don’t agree with everything Dr. Wood says, I do find him to be one of the more reasonable voices in young-earth creationism. As a biologist, he discussed the standard young-earth view that God created kinds of creatures and built within them the ability to adapt to changes in their surroundings. As a result, we can look at all the cats we see in creation (lions, tigers, domesticated cats, etc.) and realize that they are all descended from one pair of cats that were preserved on the Ark during the Flood. Dr. Wood gives other examples, and explains that this view is in line with the biological evidence he has studied, because it embraces both the similarities between species as well as their differences.

Now, there are other aspects of the film that I didn’t like, and one of them has been brought up by others, including one of the experts in the film. It presents a false dichotomy. It says that either the world was shaped by random, natural processes over billions of years, or it was created and experienced a worldwide Flood as described in the Genesis account. Obviously, that’s just not true. There are lots of other choices: old-earth creationism, theistic evolution, one of the other religions’ creation accounts, etc. It is simply senseless to present only two choices, and science would be held back if those were the only two frameworks used to study the evidence.

In addition to this false dichotomy, there is a false certainty in some parts of the film. Hebrew scholar Dr. Steven Boyd, for example, says that all the world’s greatest Hebrew scholars say that the Genesis account requires the days of Genesis to be normal, 24-hour days. That is quite false. A majority of them might (I don’t know), but I know there are great Hebrew scholars who don’t say that, such as Dr. Gleason Archer and Dr. John Sailhamer. Even some ancient Rabbis thought the earth could be quite old. In the same way, Dr. Andrew Snelling discusses the Coconino Sandstone formation and uses some research by geologist Dr. John Whitmore (who is not in the film) to state confidently that it was deposited by water. Dr. Whitmore has, indeed, come up with some evidence that it was deposited by water, but there is other evidence that it was deposited by wind. Dr. Snelling should really be more tentative in his discussion, because there is no conclusive scientific explanation for that formation.

Even though there are problems with the film, I found it well worth watching. I typically don’t like documentaries, because I would rather get my information in a way that makes it easy to verify references, search for competing views, and skip the material I already know. It’s hard to do those things with a documentary. However, it does add some wonderful visuals that really help the message of the data sink it. So I do think it is worth watching, as long as you are aware of the false dichotomy and false certainty that crop up from time to time.

9 thoughts on “My Review of “Is Genesis History?””