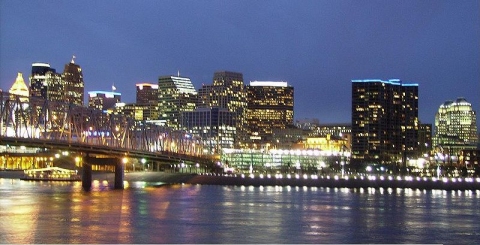 This past weekend was a busy one! I spoke at the Midwest Homeschool Convention in Cincinnati, Ohio on Thursday and Friday, and then I spoke at the Rideau Valley Home Educators’ Association Conference in Ontario, Canada. This meant giving several talks on Thursday and Friday, flying out of Cincinnati on Friday night, arriving in Ottawa (the capital of Canada) very late, and then speaking at the convention bright and early on Saturday. It was obviously tiring, but it was well worth it! I met a lot of interesting people, had a great lunch with the teens in Canada, and got several very interesting questions. Since I really did the equivalent of two conventions this weekend, I will split my report into two articles. This one will be on the Midwest Homeschool Convention, and the next one will be about the Rideau Valley Home Educators’ Association Conference.

In Cincinnati, I did three solo talks (Recent News in Creation Science, Teaching Elementary Science Using History as a Guide, The Bible: A Great Source of Modern Science) and two talks with Diana Waring (Arguing to Learn, I Didn’t See That Coming). I enjoyed them all, but I have to admit that I enjoyed the ones with Diana Waring the most. I really like the “back and forth” that happens with a co-speaker, and it is awesome for the audience to get two perspectives on both the topic at hand and their questions.

The convention itself is one of the largest in the nation, so not only were my talks well-attended, but I spent a lot of time speaking with individuals at the Berean Builders booth. Not surprisingly, many people thought that I own Berean Builders, but I do not. I sold the publishing company I used to own specifically because I am not a businessman and do not enjoy running a business. I am a scientist, teacher, and writer, and I wanted to spend the majority of time concentrating on those activities. Thus, when I started writing my new elementary science series, I did not want to publish it. I shopped it around to a few publishers and settled on Berean Builders. I think it is a wonderful publisher with the right goals for Christian Education, but I do not own it. I am simply an author it publishes.

I got a lot of great questions both at my publisher’s booth and at the end of my talks. Let me discuss one of each.

Several people at my publisher’s booth asked me about my high school chemistry course, Exploring Creation with Chemistry. The publisher of that book (which is not Berean Builders) is advertising a new edition of the book that is scheduled to be available in July of this year. The authors are Kristy Plourde and Rusty Hughes. This bothered several people, since they knew that I was the author of the first two editions of the book but do not appear on this new edition. They wondered what changes would be made and whether or not the book would still be useful for homeschoolers and university preparation. The short answer is that I don’t know, because I have not seen it. I do know one of the authors (Rusty Hughes), however, and he is an excellent teacher. This gives me hope that the new edition will be a good one.

Another thing that gives me hope is that the publisher has already produced a second edition of The Human Body: Fearfully and Wonderfully Made. Although I was an author on the first edition, I am not an author on the second edition. Nevertheless, I reviewed the book, and I think it is excellent. I strongly recommend that you use it for any student who is interested in a detailed study of the human body and has taken both a high school biology course and a high school chemistry course. When the new edition of Exploring Creation with Chemistry comes out, I will review it here, just as I reviewed The Human Body: Fearfully and Wonderfully Made. I hope I can give it just as positive a review.

The other question I want to discuss came at the end of a talk I did with Diana Waring (I Didn’t See That Coming). Much of the discussion had centered around college and whether or not a student should attend, which I addressed in a previous blog post. However, one questioner asked how we thought the landscape of college would change over the next decade. After all, with online universities like Western Governors University, you don’t have to leave your home to earn a degree. How will that (and other technological and economic issues) affect what colleges look like ten years from now?

I thought that was a great question. Online colleges and universities are good for many degrees. There are probably some degrees that can never be offered completely online, but even for those degrees, you can often take two years’ worth of courses online so that you don’t have to spend nearly as much time (or money) in college. At the same time, however, I think you need to examine your motivations for considering an online option for college. If your desire is to shelter yourself (or your child) from the world, I think that is a terrible motivation. Children should be sheltered from the world when they are young, but as they mature, they need to experience the world more and more. This shouldn’t happen all at once, of course, and just because a student has graduated high school, that doesn’t mean he or she is ready to leave home. However, at some point, young adults need to be exposed to the world, and college can be one very good way to do that. If your motivation is more about the efficient use of money and time, then I think online college is a great choice for many degrees.

So how will this change college as we see it now? The first way is obvious: fewer students will be attending traditional colleges. As a result, some traditional colleges will simply have to close. I don’t see this as a bad thing at all. There are probably many colleges that should close. In addition, I hope that it encourages the colleges that remain to focus on becoming more about academics and less about job training. In the end, colleges are often looked at these days as job training programs. You go there to get a good job. I don’t like that idea at all, and I am hoping online colleges and other alternative programs will remove that from the forefront of what most people think a college should do. That way, colleges can get back to what they were created to do – foster the kind of learning that produces deep thinkers who are less interested in their careers and more interested in advancing our knowledge in general.

Now don’t get me wrong – being focused on your career is not a bad thing! Society needs career-driven people. However, it also needs those who are more interested in advancing humanity’s knowledge. Unfortunately, I don’t think colleges today produce many deep thinkers. Perhaps the changes we see happening today will correct this problem.

Diana Waring (remember, we gave this talk as a team) added something particularly important to that answer. She agreed that online education and other alternatives will force some colleges to close, but most likely, it will be the mediocre ones. There are a lot of mediocre colleges out there, and she doesn’t think they will be missed at all as they are forced to close their doors. I strongly agree!